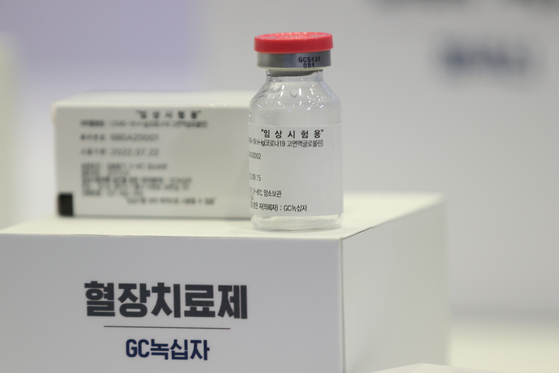 
GC Pharma's Covid-19 treatment was rejected for use by the Ministry of Food and Drug Safety.

The company filed an application for use approval for the drug, called GC5131A, on April 30. GC5131A is a plasma treatment based on blood donated by Covid-19 patients who recovered.

On Tuesday, the Ministry announced the conclusion of a first advisory committee out of three that Covid-19 drug candidates have to go through.

After reviewing GC Pharma's phase 2 clinical trial data, the committee recommended regulators not grant conditional use approval, saying the trial results were insufficient to prove the drug's safety and efficacy.

"In 11 criteria aimed to measure efficacy, there was no meaningful difference found between the placebo group and the test group," the Ministry of Food and Drug Safety said in a statement, Tuesday.

The advisory board was also lukewarm about the drug's safety. Forty-five percent of test participants experienced light to moderate symptoms like body temperatures rising and erythema.

Three patients treated with the drug died but the committee said the trial number was so small that it was difficult to determine any causality. Among the three deaths, the board said two were not related to the drug and in the third case, it couldn't determine whether it had an effect or not.

GC Pharma said in a statement released shortly after the ministry announcement that it will not "rush for a use approval" without elaborating.

"The primary motivation for developing the plasma treatment was to serve the public as a defense line in a pandemic," it said. "If the ministry's judgement is that the plasma treatment could not play this role as a [Covid-19] drug, we will not rush for procedures to obtain an approval.

"At this point, we believe our responsibility as a pharmaceutical company is to find other ways the treatment could be more effectively used in the medical field."

Even without official use approval, GC5131A has been allowed for emergency use on more than 40 patients since December. Permissions are granted when a doctor concludes the unauthorized drug is the only option for a patient.

GC Pharma added it will continue discussions with drug authorities on how GC5131A should be used.

The only Korea-made Covid-19 drug approved for nationwide distribution at the moment is Celltrion's Regkirona. Another pharmaceutical firm, Chong Kun Dang, had made a failed attempt to get approval for another Covid-19 drug candidate in March.