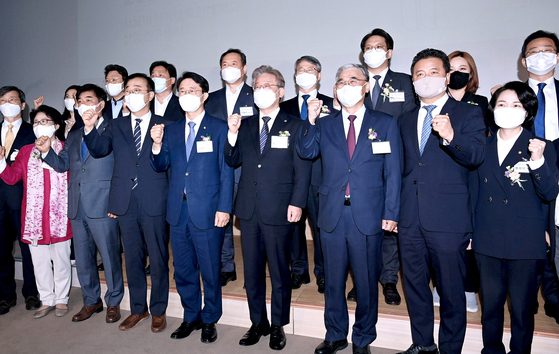 Gyeonggi Gov. Lee Jae-myung, center, launches a forum called “Democratic Peace Plaza” with its initial members at the Seoul Media Institute of Technology in Mapo District, western Seoul, on Wednesday. The launching ceremony brought together about 30 incumbent Democratic Party (DP) legislators and a hoard of other mainstream party members close to former party leader Lee Hae-chan, practically commanding the endorsement from the influential ex-leader. The governor, who is leading on opinion polls among presidential hopefuls from the ruling camp, has yet to officially declare his presidential bid, but competition to secure crucial backing from within the party has already begun among the DP presidential hopefuls well before the primary elections set to begin in late June. [OH JONG-TAEK]