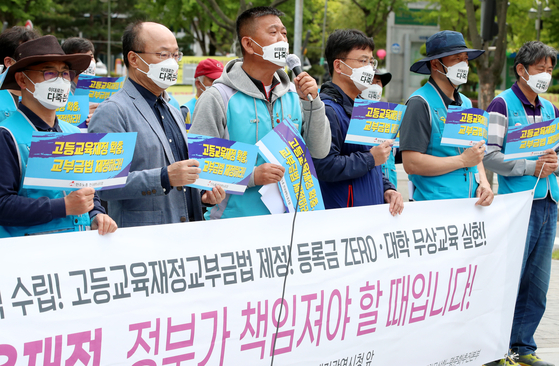 Members of educational labor unions, including Korea Professors Union and Korea University Worker's Union, hold a press conference in front of Daejeon City Hall on Tuesday calling for government support for provincial universities as they are on the verge of shutting down due to the low birthrate. [NEWS1]


The “cherry blossom ending” of provincial universities in Korea — an expression describing universities shutting down in the same order that cherry blossoms start to bloom within the country, starting with areas farthest from Seoul — has become reality, exacerbated by the low birthrate and the tendency of high school students to choose prestigious schools in Seoul over those in other areas.

This year, 162 four-year universities nationwide failed to meet their student quotas and extended enrollment periods in an attempt to fill 26,129 vacancies — 2.7 times higher than the previous year and the largest number of vacancies in 16 years, according to the Korean Council for University Education.

Of these, universities outside the greater Seoul area accounted for more than 90 percent, with acceptance rates falling significantly when compared to last year.

According to Haneul Education, the average acceptance rate for universities outside of Seoul plunged to 2.7:1 this year, the first time it has fallen below 3:1. A rate below 3:1 means universities failed to meet their quota.

Woosuk University, located in North Jeolla, said applicants could choose the department they want to go to without even having to submit their CSAT score, and receive a scholarship. Despite their desperate move, the university, after an additional six rounds of extending the admission period, started the new semester with 271 vacancies.

Honam University in Gwangju drew attention for its giveaway, as it announced it would present its freshman students with gifts of iPhones and AirPods, but eventually failed to meet its quota by 10 percent.

This low enrollment has become inevitable even for national flagship universities outside Seoul, which are relatively prestigious and normally have higher competition for admissions.

Chonnam National University, a national university based in Gwangju and South Jeolla, also failed to meet its enrollment quota in some departments, with its acceptance rate dropping from 3.11:1 to 2.7:1. 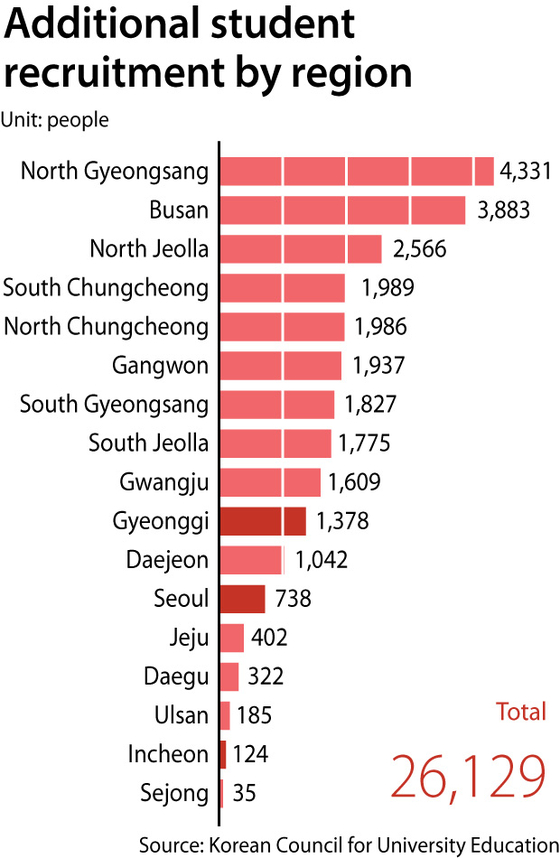 The situation, however, is not much of a surprise due to the continual decrease of students caused by Korea's chronic low birthrate.

"The crisis for universities was not created in a day,” said Park Young-jin, a professor at Chungnam National University in Daejeon. "For the past 20 years, education authorities have been focusing on increasing [the amount of] universities without taking any measures against the decline in the academic population.”

This year, some 496,000 people born in 2002 — the first year the country experienced ultra-low fertility — entered college. In contrast, the number of newborn babies in 2020 fell near the 200,000 mark for the first time.

With provincial universities already struggling to attract students from a small pool, students in Korea tend to choose prestigious universities in Seoul or the surrounding metropolitan area, and even those already enrolled sometimes quit and flock to a school in the capital. This is because the infrastructure in the capital area greatly outperforms that of the outside regions, and social views on differing university levels such as jijabdae, a derogatory term referring to universities outside the Seoul Metropolitan area, still exist.

Starting this year, the Ministry of Education announced it will double the possible score for a university’s enrollment rate when evaluating universities’ basic performance. Universities that fail to meet the limits won’t be able to receive support from the national budget for three years.

Hence, provincial universities have no choice but to naturally reduce the number of admissions — which will directly affect the survival of the school, as 70 percent of the operating costs are covered by tuition fees.

As universities outside of Seoul are on the verge of shutting down, educational labor unions including Korea Professors Union and Korea University Worker's Union have been touring each region to hold press conferences since last month, calling for more government financial aid for these universities.

The unions demanded a major shift in government policy, saying higher education should be financially supported annually through the Higher Education Subsidy Act, just like elementary and secondary schools.

They also argued that the government’s burden rate should be raised from the current 0.6 percent (10.8 trillion won, or $9.6 billion) of the GDP level to the OECD average of 1 percent.

"The government should establish mid- to long-term measures on higher education, and design detailed policies in consideration of support and fostering for local universities, as well as balanced regional development,” Baek Sun-ki, head of the Korea University Worker's Union, said.

Regions where cherry blossoms bloom last will eventually see their blossoms fall, too. Figures from the Education Ministry show that universities are expected to welcome about 480,000 in 2021, but only some 373,000 in 2024 — meaning even universities in the Seoul metropolitan area are no longer safe.