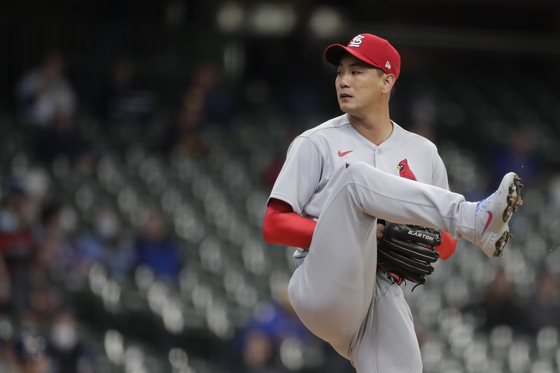 St. Louis Cardinals' Kim Kwang-hyun winds up during the first inning of the team's game against the Milwaukee Brewers on Tuesday in Milwaukee, Wisconsin. [AP/YONHAP]


Kim Kwang-hyun of the St. Louis Cardinals picked up a no decision in his fifth outing of the season on Tuesday, throwing six strikeouts with one earned run against the Milwaukee Brewers at American Family Field in Milwaukee, Wisconsin.

Kim threw five and one third innings, allowing five hits and one walk. The Cardinals went on to win 6-1 in extra innings.

The Korean left-hander got off to a shaky start in the first inning, immediately giving up a double to Kolten Wong with his second pitch of the game. Kim settled down quickly, striking out the next Brewer to the plate, and then added a pop out and another strikeout to round off the inning.

A flyout and a strikeout kicked off the second inning, before Kim threw a fastball into the dirt on a full count for his sole walk of the game. Kim threw three back-to-back balls to the next hitter up, before getting the job done with a flyout to end the inning.

The third inning passed without incident, with a strikeout and two lineouts sending the side down in order. Kim allowed another double in the fourth, but used a flyout, a pop out and a groundout to finish the job. The fifth was more of the same, with the southpaw allowing a single hit alongside a groundout, a strikeout and a lineout.

The sixth is where Kim came slightly unglued, allowing a lead-off double to Lorenzo Cane. With a runner on second, Kim struck out the next batter up, but then allowed another double to Travis Shaw, bringing home Cane from second and giving the Brewers a 1-0 lead. That was it for Kim, with Ryan Helsley taking over on the mound for the rest of the inning.

The Cardinals held the Brewers to that one run, with a tying run coming at the top of the eighth to save the loss. The 1-1 tied game went into extra innings, with a silent ninth and 10th before the St. Louis team suddenly brought home five at the top of the 11th. Milwaukee had no response, and the Cardinals won the game 6-1.

Kim remains undefeated in five starts this season, but has only managed to pick up one win. He has a 2.74 ERA on the season, and has allowed seven earned runs and five walks while striking out 24 in 23 innings pitched. He is now in the second year of a two-year contract with the Cardinals.

In 13 MLB appearances throughout his career, Kim has not lost a single game. He has four career wins with a 2.03 career ERA.