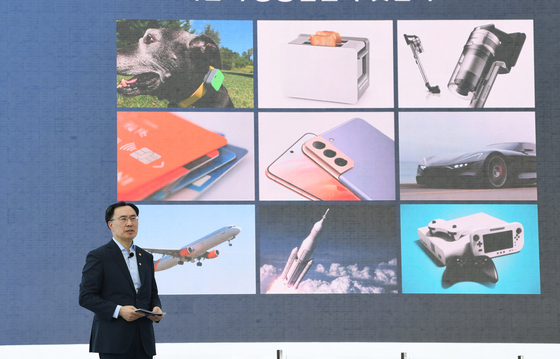 Led by the Ministry of Trade, Industry and Energy, the government Thursday unveiled a so-called K-semiconductor strategy, with a goal of helping Korea remain a global semiconductor leader.

The K-semiconductor strategy was described to President Moon Jae-in as he  visited Samsung Electronics’ semiconductor facility in Pyeongtaek.

The government promised up to 50 percent tax credits on research and development (R&D) investment and 20 percent on facilities investments.

The former represents a 10 percentage point increase from the current maximum 40 percent credit for R&D investment.

While small and medium-sized companies will be eligible for up to 50 percent, the ceiling for conglomerates is 40 percent.

The credits for facilities investments is also a significant increase. For conglomerates, the maximum credit currently is 3 percent.

The government will encourage the financial companies to create a 1 trillion won loan program with low interest rates for semiconductor companies that expand 8-inch foundry production, as well as other areas including materials, parts production and packaging. The companies will be allowed to start paying back the loans five years after they are approved and over 15 years.


The government will also support the semiconductor industry in terms of infrastructure.

The government will build a large-scale irrigation system exclusive used by semiconductor manufacturers and share the cost of building a power grid with the Korea Electric Power Corp.

These policies are supposed to help semiconductor companies that have promised 510 trillion won in investments through 2030, which includes Samsung Electronics’ 171 trillion won.

“We have created this strategy at a critical time when there is a severe shortage of semiconductor supplies as the international landscape for semiconductors [especially between the U.S. and China] has been changing rapidly,” said Moon Sung-wook, Minister of Trade, Industry and Energy, who attended the president's visit to Pyeongtaek. “We could lead the global semiconductor value chain if we become a stable supply base that meets global semiconductor demand.”

The government has particularly emphasized the importance of the semiconductor industry in its innovative growth agenda, as it accounts for 45 percent of investment in the local manufacturing industry and 20 percent of exports.

The origin of K-strategy (KOR)