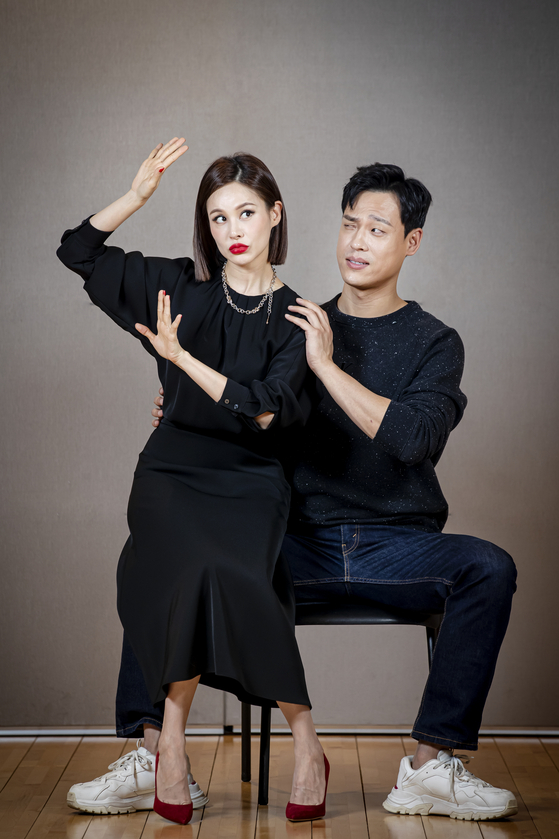 Musical actors Ivy, left, and Choi Jae-rim demonstrate the scene “We Both Reached for the Gun,” a ventriloquizing number in the musical “Chicago” (1975). [JEON MIN-GYU]


The 1975 musical "Chicago" is based on Maurine Dallas Watkins's 1926 play of the same name, which was inspired by two real-life murder cases that happened in 1920s Chicago. The two cases, both committed by women, sparked sensational media frenzies at the time and ended in acquittals.

Theater director and choreographer Bob Fosse made the play into a musical of the same name in 1975, satirizing the injustices in American society and yellow journalism, which can be defined as journalism that is based upon sensationalism and crude exaggeration.Over four decades later, "Chicago" has become one of the best-known musicals of the 20th century and is currently the second longest-running show on Broadway. The musical premiered in Korea in 2000 and has had 13 productions so far.

Protagonists Roxie Hart and Billy Flynn represent the twisted world. Roxie is a naïve woman who grandiosely dreams of becoming a successful showgirl, and Billy is a materialistic lawyer who makes his murderess clients into stars by spinning and sensationalizing their crimes.

The musical is already known to be an entertaining black comedy, but this year's Korean production of "Chicago" offers an even more special chemistry between musical actors Ivy and Choi Jae-rim. Ivy has played Roxie for the past five productions since 2012, while Choi portrays Billy Flynn, his first time starring in "Chicago."

"I ruminated about my character [as Roxie] to the point I couldn't sleep," said Ivy, who has embodied the role for nearly a decade.

Choi, despite this production being his first time taking on silver-tongued lawyer Billy, seemed made for the role.

"The choreography [of Chicago] stands out, but acting is the real challenge," Ivy continued. "At one point I realized the importance of getting the story across, so I thought hard about how to tell Roxie's life story to the audience."

"I'm extremely confident [about this production] because every actor practiced with all their hearts," said Choi. "I was not only 100 percent prepared before the opening day, but was even thinking, 'I just want to start performing right now.'" 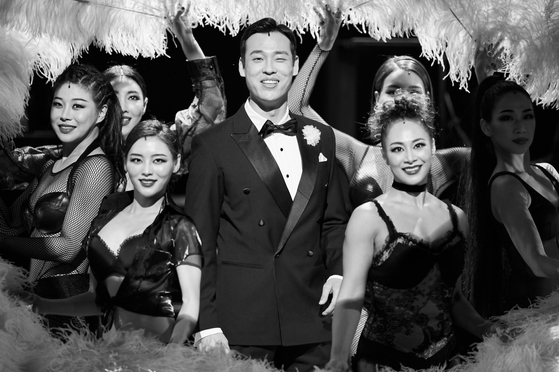 A scene from “Chicago” [SEENSEE COMPANY]


"Chicago" is sustained purely by the cast from beginning to end. Unlike many other musicals, there are no spectacular stage sets or flashy costumes and wigs; only a jazz orchestra playing in the back and a sensual dance crew. The actors and ensemble don only one all-black outfit from start to finish.

"[The musical] doesn't distract people with special effects," Choi said. "It simply shows absolutely everything an actor has, which makes it extremely challenging. But if I can do it right, I know I will truly shine on the stage. Playing Roxie or Velma Kelly in 'Chicago' means you're an actor who can do it all: sing, dance and act."

As difficult as it is, a lead role in "Chicago" is considered to be every musical actor's dream. The current production's competition for the role of Roxie was 200 to one.

Each number in "Chicago" is deemed a highlight. Since it was released in 1975, each new actor who takes on a role is bound to be compared to someone else's previous performance. Pressure is especially on for the actor playing Roxie, who has to steal the stage alone for over seven minutes during the number "Roxie."

"No other musical lets an actress have a one-person show like that," said Ivy. "The audience has a lot of expectations for that number. At first I felt so much pressure because it was right after my predecessor Oak Joo-hyun had won Best Actress at the [2008] Korea Musical Awards for this role. I was overzealous and overacted if you look at my old videos; they're so embarrassing. Now I feel like I can properly do it like it's my own story, but the scene requires so much concentration that I start sweating before I'm even dancing." 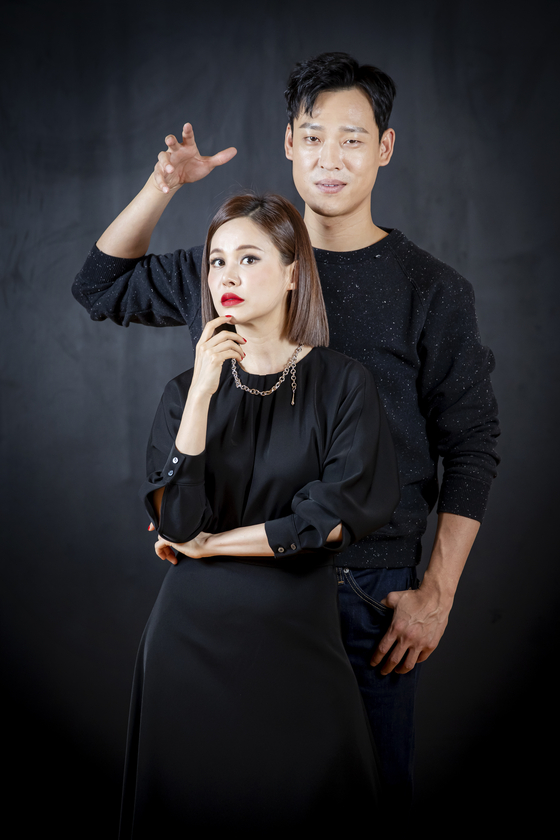 
A rehearsal video demonstrating Choi's astonishing ventriloquism skills earned him attention and contributed to the show's popularity.In the number "We Both Reached for the Gun," Billy controls Roxie like a puppet and speaks for her with ventriloquism, spinning her story to gain the sympathy of the press. Choi's performance in this scene made it come to life, but the actor remained humble.

"I was also surprised by the enthusiastic response," he said. "But ventriloquism is not the essence of this scene; just a small trick."

As "Chicago" points out, show business can only go on by constantly striving to grab the public's attention. Choi said he sympathizes with characters of "Chicago" who will do anything for attention.

"That's why I do tricks [ventriloquism]," Choi said, laughing.

"During the third year of my musical career, I had a similar concern. After I appeared on the popular entertainment show 'Qualifications of Men' [in 2020], I was given big roles. I was worried about two things: How long will this fame last, and what if it goes away? My conclusion was that public attention is transitory, so instead of worrying about that, I should improve myself. So I left the musical scene for a while and studied acting at graduate school, which I still think was a great decision. After this production of 'Chicago,' my ventriloquism will no longer be a hot topic, and only Choi Jae-rim the person will remain."


"Musicals are my life coach" 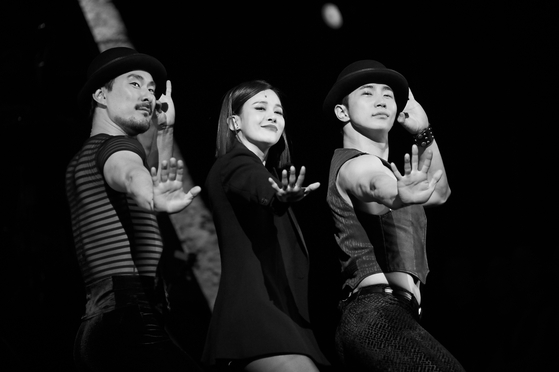 A scene from “Chicago” [SEENSEE COMPANY]


Two other actors are alternating the role of Roxie this season along with Ivy, the first triple casting for a Korean production of "Chicago" — Tiffany Young of former girl group Girls' Generation and newly-rising rookie Min Kyung-ah. Does Ivy feel like Velma from the musical, who finds her popularity threatened by new sensation Roxie?

"Not at all. In fact, I'm flattered that I'm still included among very young actors," she said. "I'm grateful that I can learn a lot by watching them. I initially learned so much from working with actor Choi Jung-won who has played Velma since I joined this musical. She always vividly demonstrates things to me and encourages me. I want to be a senior colleague like her."

Ivy was previously a popular solo singer but changed her career path to musical theater in 2012 through her debut in "Chicago."

"Musicals are my life coach," she said. "I really don't know much about the world. I'm not naïve, but I'm pure. I feel myself grow through musicals. The pandemic made me worried about how to carry on, but Roxie never loses courage even in the worst situations, and I want to be someone like that. My work gives me the courage and strength to live." 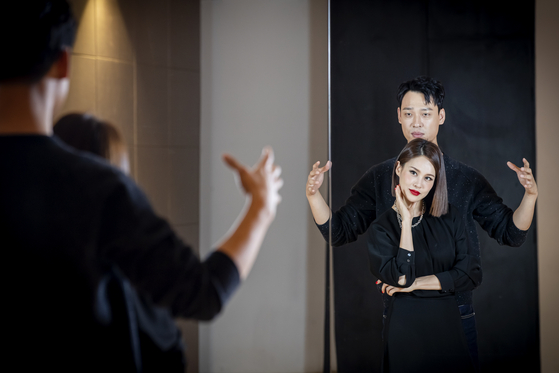 
Although Choi seems to have been on the up and up in the industry with his extraordinary vocals, it also took him over a decade to secure lead roles, especially due to his decision to take a break and pursue further education.

"The one to two hours the audience sees on stage is the result of an actor's 20 to 30 years [of accumulated effort]," Choi said. "We dedicate our lives to the stage. As lavish as an actor's life looks, it's mentally and physically taxing. It takes a lot of self-discipline to satisfy the audience, and so many actors go unappreciated. If there's approximately 2,000 musical actors, probably only 200 are working right now. It's a tough and depressing time, but I hope the actors on stage give you the feeling of being alive."

At the end of the day, the world of show business that "Chicago" pokes fun at also consists of people's blood, sweat and tears. The musical demonstrates that fact to the fullest, which may be why "Chicago" remains the classic of classics in a world that has been turned upside down.

Lotte to open L7 hotel in Chicago next year