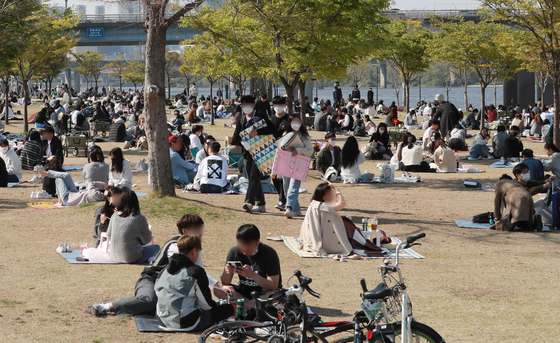 It is possible to order chicken with just one phone call, and you can buy beer from convenience stores in the park. “Chicken and beer at the Han River” is considered a must-try experience for foreigners.

Can we continue to drink at Han River Park? After medical student Sohn Jeong-min was found dead after drinking at the riverside park in Banpo, voices opposing drinking at the park are increasing.

Seoul City is also considering designating the Han River Park as an alcohol-free zone, as the revised health promotion act will be enforced from June 30. The revised act allows local governments to designate some public places as alcohol-free zones at their discretion and impose a fine of 100,000 won ($88) for violations. Health experts all agree that no other country is as generous as Korea when it comes to drinking in public. In fact, drinking in public places is strictly controlled in other countries. Most states in Australia designate public places as alcohol-free zones. In the state of New York in the United States, even holding an open alcoholic drink in public is subject to fine or imprisonment of up to six months. In Canada, all states except for Quebec ban carrying alcoholic beverages in public places. According to the World Health Organization, 102 countries restrict drinking in the streets or parks.

Of course, there’s no reason for Korea to follow what other countries do. Each country has a different culture and environment. Designating most public places as alcohol-free zones is expected to trigger a backlash. When Seoul designated 22 urban parks as alcohol-free zones through a city ordinance, opponents asked why they needed the government’s permission to drink beer in the park.

In the end, the key is how the local governments use their authority. They need to survey the people about drinking in public and listen to their opinions to identify vulnerable times and problem areas. Rather than completely banning “chicken and beer at the Han River,” the focus should be driving out the behavior that leads to drinking all night in the park that can lead to accidents.