Multi-game legend sCsC looks back on a decade in esports

Multi-game legend sCsC looks back on a decade in esports 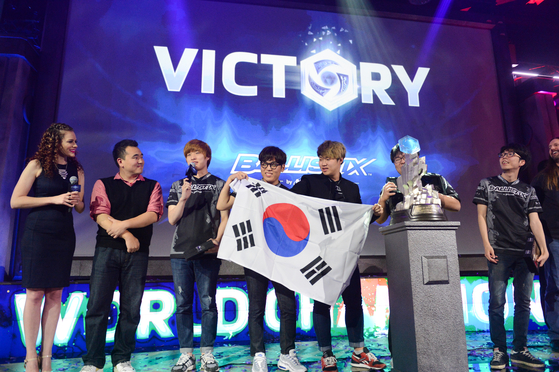 Kim ″sCsC″ Seung-chul (third from left) gives an interview on stage minutes after winning the 2016 Heroes of the Storm Fall Global Championship, held at the Anaheim Convention Center as a part of BlizzCon. [BLIZZARD ENTERTAINMENT]


Few players in esports history have proven themselves in as many genres as 26-year-old multi-game prodigy Kim "sCsC" Seung-chul.

Newer fans may only know him as a Teamfight Tactics streamer who goes by the handle "DdingDdaeng". Those with no knowledge of his past accomplishments may have been perplexed by his choice to compete in the TFT Fates Championship, the global finals of which were held this April, under a different name.

Viewers who have been around for longer, however, will recognize him as sCsC, the Heroes of the Storm legend who took home many of the game's most prestigious trophies including two Super Leagues, a BlizzCon, a Gold Club World Championship and two Eastern Clashes.

The old-guard audience from the early days of StarCraft II may also remember him simply as "sC," the incredibly young and talented Terran player who made several memorable runs in the Global StarCraft II League despite suffering repeatedly from spontaneous pneumothorax.

Exceptional players excelling in several different games over their career is not too uncommon in esports, considering the blisteringly short life span of many titles. In the vast majority of cases, however, they stay within a given genre: A prime example would be Kim "EscA" In-jae, who won premier tournaments in five different shooting games over the span of a decade.

After 11 years of competitive gaming, sCsC recently put his career on hiatus to start his mandatory military service as a public sector worker. Last month, a week before he left to receive basic training at Nonsan, the Korea JoongAng Daily caught up with the former world champion at a coffee shop near his home in eastern Seoul. 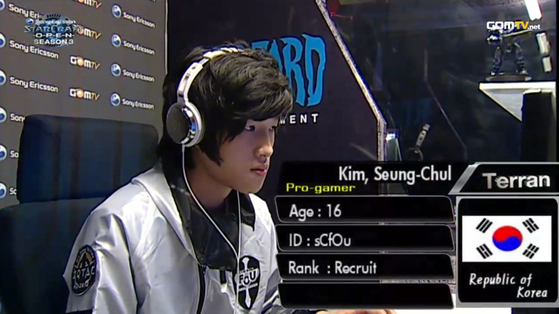 The 2010 Sony Ericsson StarCraft II Open Season 3 was where sCsC, then known as simply ″sC″, made his professional debut. He was 15 at the time; the 16 on the broadcast graphic is by Korean count. [SCREEN CAPTURE]


Q. Many fans haven't heard from you for a while. What have you been up to since the Heroes pro scene was abruptly shut down at the end of 2018, and why did you start going by DdingDdaeng?

A. I had no idea the HGC would just completely disappear like that out of the blue, although I thought the league could get downsized a bit. I had been knees deep in preparation for the next season when I heard the news. It came as a huge shock, and I felt really empty for a while.


But I knew that just staying angry wouldn't change anything. I decided to jump ship instead of staying in the grassroots scene, because I didn't think Blizzard would ever return to support it. I started dabbling around with autobattlers, like Dota Auto Chess, and competed in a few events. Then when TFT was released, I fully committed because I had trust in Riot Games' management of esports.

As for DdingDdaeng, it's the tag I used when I played League of Legends a long time ago. It doesn't really mean anything, and I hadn't planned on using it over sCsC. But when I hit No. 1 on the TFT leaderboards and switched on my stream, around 2,000 people tuned in, and everyone started calling me DdingDdaeng because I had never bothered to rename my account. I just stuck with it since then because I didn't want to confuse people and risk losing viewers.


Q. How has the switch to autobattlers been? Did you find the game to be similarly taxing at the highest level, or has it been relatively relaxing to compete in a slower-paced, probability-dependent genre?


A. I know people love to rag on TFT for its luck-based elements, but there definitely also is some room for skill expression, and I've been working on discovering more avenues for it ever since I started playing.


There's definitely real tension in high-stakes matches, too. At the global championship, my hands were literally trembling when I was rolling down for something specific on very low health. I've been playing games professionally for quite a while, but that moment still got to me. Those life-or-death situations don't feel all that different. I haven't cut down on my regular practice hours, either, so I wouldn't say my autobattler experience has been lax.

That being said, I can agree that autobattlers are more comfortable in the sense that when you're playing an RTS or MOBA, the game always demands full physical attention even if all you're doing is just warming up. In TFT, if there's no special occasion, you can at least have something else playing in the background, or keep answering questions from chat between rolls, which is nice.


Q. What's the greatest regret of your career?

A. Not having gone pro in League of Legends. In late 2012, I quit SC2 for a while to try my hand at League. I reached the top 100 pretty quickly, and teams started inviting me to tryouts.

Something I still think about sometimes is that I had not one but two chances to join SK Telecom T1 back then. I really wanted to get in, but I messed up in both of my tryouts and they eventually went with someone else. There were other offers from other teams, too, but I soon gave up on League and chose to return to SC2. Now I wonder what could have been.

My advice for younger gamers who are dreaming of going pro is simple: Play League. Forget about all the other games. Uninstall them right now. Just play League.


Q. What's the happiest moment of your career?

A. The best memory I have is winning BlizzCon in 2016. BlizzCon was the event I'd always dreamt of winning since my debut, and it felt like realizing a childhood dream. In terms of how much fun I had playing a particular title professionally, though, I'd say SC2.

I don't think it has too much to do with the game itself. Back then I was just super happy and excited to have become a pro gamer. Living in a team house, playing in televised matches — getting to do all those things for the first time was really fun. 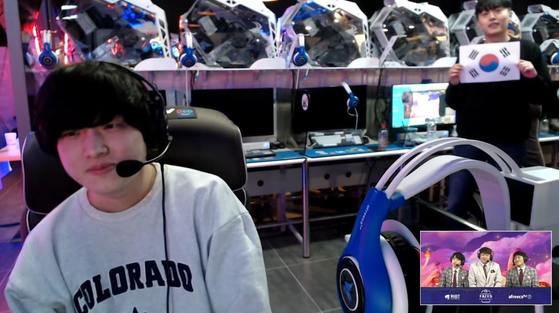 Korean broadcasters and sCsC conduct what should be his final on-screen interview for some time. Due to Covid-19 travel restrictions, sCsC competed in the global finals of the Teamfight Tactics Fates Championship from a designated venue in southern Seoul. [SCREEN CAPTURE]


Q. What do you think you would have been doing had you not become a professional gamer?

A. You know what, I literally can't imagine myself doing anything else. Maybe it's because I debuted at such a young age and never stopped playing since.

My parents were opposed to the whole idea of pro gaming at first, since video games had such a negative social image back then, but they eventually came around after I kept proving I was determined and skilled enough to make it. From then on they always supported me wholeheartedly.

Games are what I'm best at, and I want to keep playing for as long as I can. Once my service ends, I plan to return to streaming full time, and maybe also shoot some content for YouTube.


Q. Do you want to say anything to your fans abroad who still remember you from Heroes and SC2, and sometimes wonder how you're doing?

A. I couldn't be sure whether they remember me, but I think of them a lot. That's actually why I signed up for the global championship as sCsC, and not DdingDdaeng, like I had been doing for domestic events. I wanted to send up a signal flare of sorts — tell my fans that I'm still alive, that I'm doing well.

When I took a look at the English stream VODs after the event was over, I noticed that some fans still remembered me from SC2 and Heroes. It made me really happy. I'm glad I was able to say goodbye in my own small way before taking leave.