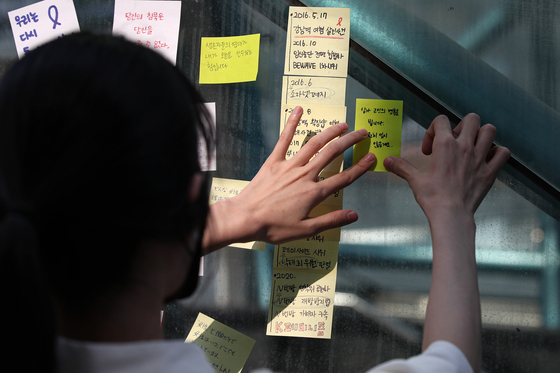 A woman attaches sticky notes with hand-written condolences on May 17 last year at Exit 10 of Gangnam Station, southern Seoul, marking four years since the murder of a 23-year-old woman by a stranger in a bathroom near the station in 2016. [NEWS1]

Gender inequality is a big issue in Korea, though no one can really agree on who is being treated unfairly.

According to a survey by Ministry of Gender Equality and Family of 6,570 young Koreans aged 19 to 34, 74.6 percent of young women said “Korean society is unfair to women.”

But about 51.7 percent of men of the same age said society is rather unfair to them.

The debate is degenerating for some of the more extreme into a battle of conspiracy theories and name calling.

Comments have ping-ponged back and forth online, with supporters of men’s rights being tagged with labels meant to belittle their causes. 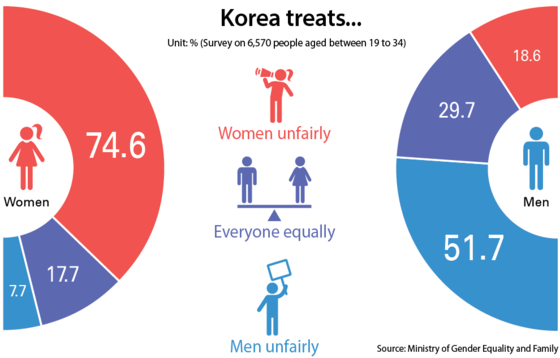 Koreans are generally aware that the online battles are a bit extreme and not all that representative.

“Maybe the fight between genders has been little exaggerated on the online sites, but it actually exists in reality,” said a 26-year-old woman who spoke on the condition of anonymity. “I know some acquaintances who cut their hair and wear no make-up, and even chose to be single just because they hate men.”

She said 2016 was the year that the conflict started intensifying, after the murder of a 23-year-old woman by a stranger in a bathroom near Gangnam Station, southern Seoul.

“After I saw a video of dating violence that occurred in Busan last year, I realized that women are always weaker than men in any situation,” said a 30-year-old woman, who works as a freelancer. “Historically, women have faced overt discrimination for hundreds of years. But I feel like men take for granted the vested interests they have always had but are only sensitive on what they are losing.”

The concept of gender quota systems has escalated the fight, some say.

Feminists argue that a gender quota system is essential as the notorious glass ceiling exists in Korean society, preventing women from taking high-level positions in companies. However, some young men argue that such a system is an act of reverse discrimination, saying that all people, regardless of gender, should get an equal chance when entering the job market.

“I do feel sorry for my grandmother and mother who have experienced frustration in the past when entering college or the workforce in the patriarchal society,” said a 28-year-old man, an office worker in Seoul. “But women in this generation have enough freedom to study. It’s such a problem that young women in their 20s and 30s try to extract benefits, citing the inequality that has happed in the previous generation.”

“Thinking about it the other way around, why do sons have to experience unfair treatment in the hiring process or promotion due to the mistakes that the fathers have made in the past?”

A 30-year-old graduate student who has been searching for a job says he is afraid of getting married due to gender discrimination that exists in society.

“Some Koreans still think that men are responsible for buying an apartment for women ahead of the marriage,” said the man.

According to the Ministry of Gender Equality and Family's survey, only 18.7 percent of women respondents were certain that they will get married in the future. Some 23.9 percent said they will not get married.

Economic uncertainties and unemployment are the other major driving forces.

“Unlike other developed countries that value more on non-material things such as cooperation or voluntary work, Koreans particularly value of material things,” said Lee Myoung-jin, a sociology professor at Korea University. “While it has become extremely difficult to accumulate wealth in Korea's labor market, young Koreans feel a deep discontent on the reality that they have to share their gains with the people of the opposite sex and the older generation. And this kind of discontentment leads to a conflict between genders and generations.”

“Men and women only focus on the unfair situations that they are facing, but remain silent regarding the discrimination that the other side has been suffering,” said Choi. “This kind of attitude benefits nobody but deepens the conflict.”

“It’s important to have continuous communication and discussion based on their efforts to understand each other.”

Time to end the gender conflict