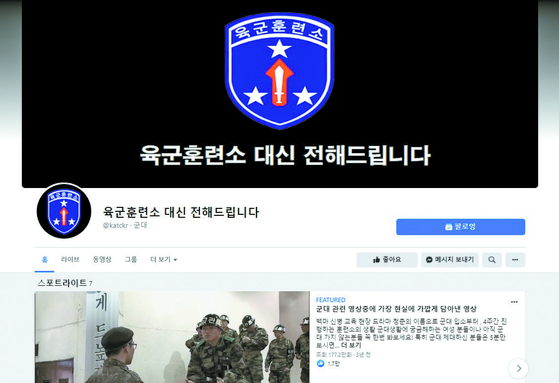 The banner of ″We tell you what the Army training center won't,″ a Facebook page where soldiers raise awareness about living conditions on base. [FACEBOOK]


While stories of bad food and head-scratching commands in the Korean military are well-known by both former conscripts and civilians alike, the lifting of strict prohibitions on soldiers' Internet and mobile phone use on base has sent military officials scrambling to address problems being raised online.

One Facebook page which traffics in such tales, titled “We tell you what the Army training center won’t,” has amassed 146,000 followers. Tip-offs and photos from those on active duty –– previously unavailable due to the ban on conscripts carrying mobile phones on base –– have shed new light on sub-standard living conditions in the military, much to the chagrin of the defense establishment.

On May 2 –– a Sunday and normally a quiet day of rest for soldiers –– the page received multiple submissions about a commander who ordered his battalion to capture a cat roaming on base, a large gathering of senior military officers in violation of Covid-19 restrictions, and a photo of a paltry meal consisting only of rice, radishes, fried seaweed, and kimchi provided to a soldier in isolation on base who had returned after taking leave, just to name a few. 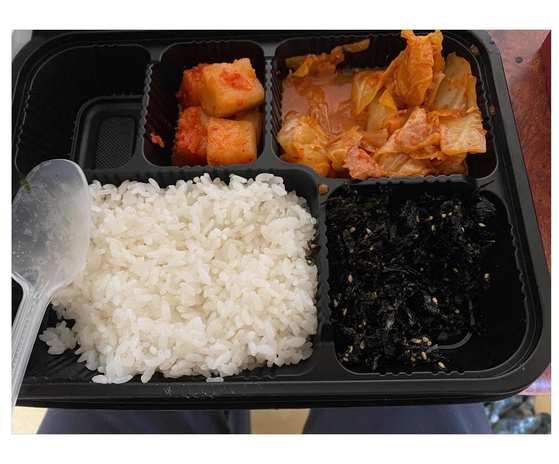 A photo of a meal given to an active-duty soldier in isolation who returned to base after taking leave, uploaded to the "We tell you what the Army training center won't" Facebook page on May 2. [FACEBOOK]

While the military says it will investigate the posts, its responses to questions about soldiers’ circumstances are rote and almost robotic. “We will be more thorough in our attention to the welfare of soldiers,” and “We will confirm violations of orders and take measures accordingly” are two standard responses delivered by military officials when confronted with such posts.

The “Army training center” Facebook page counts not only current conscripts among its followers, but also former soldiers, girlfriends, and parents. Some have expressed anxiety about the living conditions of their loved ones.

The author of one tip-off said that Covid-19 precautions prevented soldiers at the Army’s training base in Nonsan, South Chungcheong from showering or going to the toilet regularly, leading one parent to comment below, “My son is in his third week of training and says going to the toilet has become easier, but now I don’t know how true this is.”

The “Army training center” Facebook has seen traction since the lifting of the military’s restrictions on mobile phone usage inside soldiers’ barracks in July.

Page operator Kim Joo-won told the JoongAng Ilbo in an interview on May 3, “Although sub-par meals for soldiers was an issue we raised in February last year, photographic tip-offs following the end of the ban on soldiers carrying mobile phones has played a big role in raising awareness of such problems.”

The potential of Kim’s page to damage the military’s reputation has not escaped the attention of defense officials.

“After we raised the issue of inadequate meals in the military, an investigator from the Defense Ministry came by my house and asked for information about the person who sent in the tip-off.”

To ward off possible legal or administrative penalties, Kim has registered the Facebook page as a media outlet.

“I was slightly intimidated, and decided to register the page as an online newspaper to make it clear it is a public interest project, not a personal one.”

According to one official who spoke on the condition of anonymity, senior military officials view the proliferation of tip-offs and photos as the consequence of the relaxed policy on mobile phone usage on base.

“Quite a number of commanders and officers are of the opinion that mobile phone usage has exacerbated the problem.”

“Soldiers using mobile phones should be credited for revealing structural problems which are not being resolved internally,” Yang said. “They play a central role in publicizing the fact that the military, which bleats on about planning for the future, has been unable to even solve the basic problem of sub-standard meals for conscripts.”