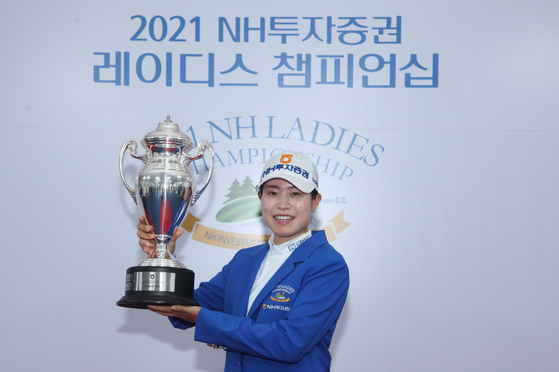 
Park Min-ji picked up her second KLPGA Tour victory of the season on Sunday at the 2021 NH Investment & Securities Ladies Championship, a tournament hosted by Park's main sponsor, at Suwon Country Club in Gyeonggi.

The 2021 NH Investment & Securities Ladies Championship started in 2008. This is the first time an NH-sponsored golfer has won the tournament.

Park’s second victory comes only three weeks after her first, when she took away her first win this season in April at the Nexen Saint Nine Masters 2021 at Gaya Country Club in Gimhae, South Gyeongsang.

Park is the first to add a second KLPGA win this season. Park debuted in 2017 and won once every year until this season, when she won twice, to make a total of six KLPGA career wins.

"This is my fifth year playing on the KLPGA Tour" said Park, "and this is my first-ever second win in a season. I don't think I will ever forget this tournament."

Park topped the leaderboard going into the third and final round — as this tournament was a three-day, 54-hole event — just one shot ahead of An and Lee.

Park made her first birdie of the day on the par-3 fifth. However, her second shot landed in the bunker and forced her to bogie on the par-4 seventh. Park made up for that bogie right away, birdying the par-5 eighth. 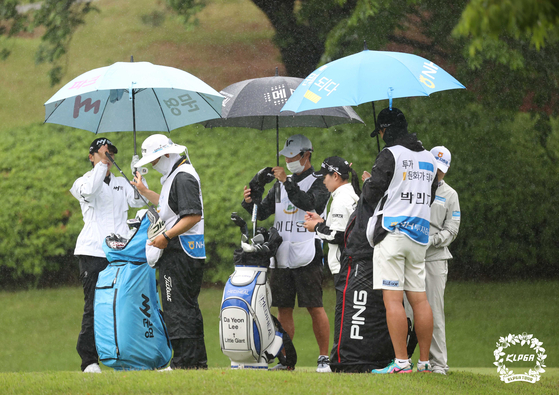 Heavy rainfall continued throughout the tournament on Sunday at Suwon Country Club in Gyeonggi. [KLPGA]


Despite the heavy rainfall that continued into the second half of the tournament, Park fought her way through, adding two birdies in the par-5 11th and par-3 13th, and finishing 14-under-par at 202.

An trailed behind by just one shot until the very last par-4, 18, where her last birdie putt missed the cup and the chance to take the game over time. This is An's second tournament of the season and she is still looking for her first win.

Defending champion from 2019 Choi Hye-jin finished 63rd, making three bogies in the first round, two bogies in the second and four bogies and a critical double-bogie in the third round.

The KLPGA Tour will continue with the 2021 Doosan Match Play Championship at Ladena Golf Club in Chuncheon, Gangwon from May 19 to 23. The upcoming tournament will return to its usual four-day, 72-hole format.