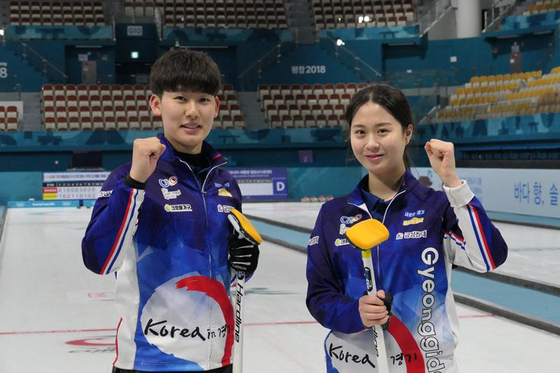 
Kim Ji-yoon and Moon Si-woo will represent Korea at the World Mixed Doubles Curling Championship 2021 in Aberdeen, Scotland on Monday, competing to earn a spot at the 2022 Beijing Olympics.

Mixed doubles curling was introduced as a new event at the 2018 PyeongChang Winter Olympics, returning for a second time in Beijing next year.

A mixed doubles team is composed of one male and one female player with no alternates, meaning both members must be able to both throw and sweep the stones.  One player throws the first and last rock, while the other player throws the second, third and fourth.

Games are played on the same curling sheet as the traditional event, but there are eight ends of play instead of ten, and six stones instead of the regular eight.

The biggest difference in the mixed doubles is that unlike traditional curling, two stones — one from each team — are placed on the sheet before the start of each end.

These extra stones are placed on the center line that runs down the middle of the entire sheet. The team that throws the last rock has theirs placed inside the house — the large circular target — whereas as the other team gets a guard stone outside of the house.

Each team also has the option to use a "power play" once per game, which forces both of the preplaced stones to the sidelines, potentially leaving the middle of the sheet open and allowing the team with the final shot, or the hammer, more room to do some damage.

Usually, the power play is used in the latter half of the game, when the team is looking to score more than one point for a big comeback or to lock in a lead to win the game.

Before flying to Scotland, Kim and Moon defeated Jang and Jeon 6-4 in the first round and 8-6 at in the second round of the national team qualifications.

The second round was a close match, with both teams tied at 1-1 until the third end, when Kim and Moon took the lead with two points and added a point in both the fourth and fifth end.

Just when it seemed the game was won, Jang and Jeon used their power play on the sixth end and scored a big three points to pull themselves up to a 6-6 tie in the last eighth end, pushing the game into overtime.

However, Kim and Moon used their hammer in the extra ninth end to take out their opponent’s stone, adding two points and winning the Team Korea title 8-6.

Kim and Moon will compete at the world championships starting Monday.