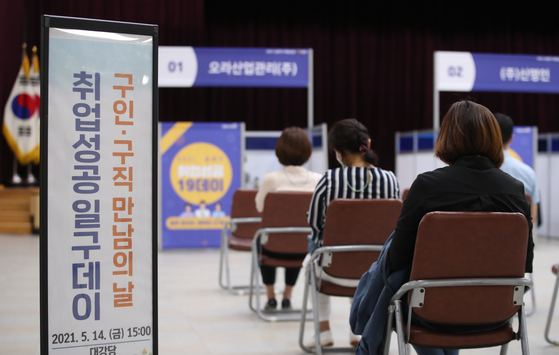 Applicants wait for job interviews during a job fair held at Songpa District office in Jamsil, Seoul, on May 14. [YONHAP]


The number of young people employed jumped in April, though the jobs were low in quality.

According to Statistics Korea, 3.83 million people aged between 15 and 29 were employed last month. That’s 179,000 more than in the same month a year earlier.

The employment rate of people in this age group rose 2.6 percentage points to 43.5 percent, edging close to the 43.8 percent of December 2019.

A full 70 percent of the jobs were temporary, with contracts of more than a month but less than a year, while 99,000 out of the 179,000 added jobs were low or unskilled. The positions included those in construction, food delivery, building sanitation and security.

Three conditions must be met to be considered unemployed: the ability to work, actively seeking work and no work for at least a week.

Finance Minister Hong Nam-ki wrote Monday that the government will help with youth employment by creating quality jobs. Hong posted his comments in celebration of Korea’s coming-of-age day, which is May 17.

“Congratulations to those that were born in 2002, who turned 19 this year,” Hong said. “In 2002, the entire country was filled with joy and confidence as we entered the final four at the World Cup.”

Noting that he is a father of two boys, he said he has an interest in youth problems and that he is sincere about addressing the difficulties that young people today face amid the global pandemic.

In terms of total employment, the number of people working in Korea was up 652,000 last month on year. It was the second consecutive month of on-year gains and took the total number of people employed to 27.2 million.

The unemployment rate fell to 3.7 percent from 3.9 percent and is down from January’s 5.4 percent, which was a 21-year high.