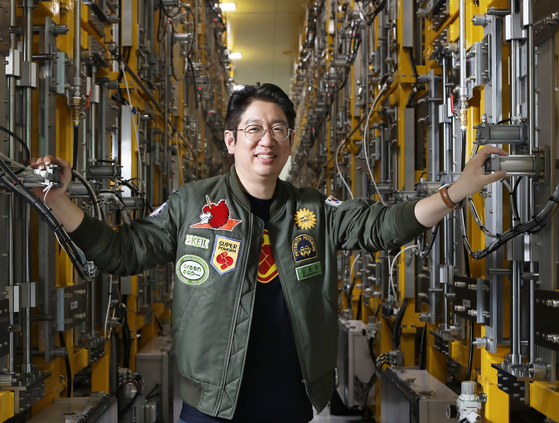 Ex-culinary professor Kim Young-wook started the business with some of his students to develop insect-based snacks and to run the restaurant. The team spent hours a day in a lab, grinding dried mealworms into powder form.

Over the years, the team's production methods evolved as they applied food processing techniques to produce more powder and extract higher levels of nutrition from the same quantity of mealworms. They went on to develop technology that could separately extract oils and protein from the insect's tissue and shell.

Papillon's Kitchen closed temporarily in 2018 and Kim is not currently a restauranteur. But his company KEIL, where he serves as CEO, is now Korea's largest supplier of edible insects to food, cosmetics and animal feed factories. Mealworms are the focus.

KEIL's first mass production facility is nearing the completion in Osong, North Chungcheong. It will farm the insects in quantity and process them into powder or oil. Test operations of the factory were commenced in May.

"Around 100 tons of mealworms are produced in Korea per year," says Kim. "Once our factory starts full operation, KEIL's annual capacity alone will reach 1,000 tons."

The farming process starts in a blue tray filled with wheat bran, which is the grain's outer layer. More than 2,000 mealworms grow from eggs, larva, pupa to adults per box. The Osong factory has hundreds of blue trays lined up in shelves at rooms where temperature and humidity are measured and controlled real-time.

One room contains an "egg tower" where the trays are kept until the eggs hatch. It has multiple vertical pillars, where the trays slowly move up, down and around to the next pillar.

"It takes 150 days for mealworms to fully grow. With special chemicals, this process can be reduced to 60 days," said Kim.

The essence of KEIL's scale-up plan is the cooperation of smaller farms. The company will supply larva to breeding farms that will take charge until the insects are grown. Then KEIL will buy them back to process them.

In the past, KEIL had to source mealworms from domestic farms, which are mostly small in size. That limited production volume. Under the cooperation model, KEIL will handle the trickiest part--of cultivating eggs to larva state-- and leave the rest to farms to boost scale.

The company is currently partnered with five farms but plans to expand this number by educating other farmers.

The reason scale matters for KEIL is because Kim's plan for edible insects extends beyond protein bars and biscuits. Its true business value, he says, lies in demand for industrial uses, like animal feed for livestock and fish farms, fertilizers, skin care products and health supplements. For corporate clients, proving that KEIL has capacity to meet orders for mass production was a must to win deals.

"A single mealworm can produce so many ingredients," says Kim. "Its oil is unsaturated fatty acid that can be used in skin care products. After extracting protein from its tissue, the shell offers protein and minerals that can be used in animal feed. Even insect waste can be used as fertilizers.

The essence of this business is to have the technology and facilities to mass produce all of these products from mealworms."

A number of studies have suggested that insects offer high nutritional value. In an April report, the United Nations said edible insects are a "good source of protein, fatty acids, vitamins and minerals," consume fewer resources, are easier to cultivate and cause far less environmental damage than meat.

An important reason insects are rising as an alternative protein source is because population is growing and experts raise concerns that the current food consumption pattern dependent on meat and fish is not sustainable. Especially at a time where climate change is a rising issue.

"Humanity's protein source at the moment has been largely limited to dairies, meat and beans, which also serve for cattle as animal feed," said Kim. "Insects, on the other hand, are an underdeveloped resource that isn't part of that chain."

A global leader in the field of edible insects is France's Ynsect. The Paris-based startup completed a Series C funding last year, bringing its total financing to $425 million since being established in 2011. Last year, KEIL and Ynsect signed a memorandum of understanding to collaborate in European and Asian markets.

Ynsect currently has a production capacity of 800 tons a year and aims to boost this to 80,000 tons by 2025. Once the factory is done and the farmers are educated by the year's end, KEIL will have annual production capacity of 1,000 tons. By increasing the number of collaborating farms, the company aims to reach 100,000 tons of mealworm produced a year by 2025.