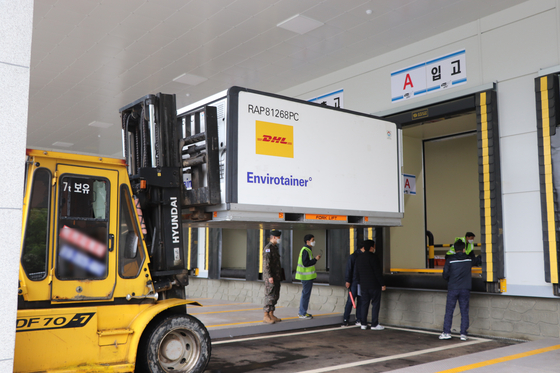 A forklift moves a large container carrying 1,068,000 doses of the AstraZeneca vaccine to be distributed to medical institutions across Korea on Monday. The vaccine, produced by Korean bio firm SK Bioscience in Andong, North Gyeongsang, is for domestic use under a contract between the Korean government and the British drug company. [YONHAP]


With new batches of AstraZeneca and Pfizer vaccines soon to be delivered, the country’s vaccination campaign is expected to speed up this week after lagging due to vaccine shortages.

The government’s Covid-19 vaccination task force on Monday announced that 1,068,000 doses of the AstraZeneca vaccine produced by SK Bioscience, the local contract manufacturer, will be released and distributed to medical institutions across the country from its manufacturing plant in Andong, North Gyeongsang.

This is part of the 7.23 million AstraZeneca vaccines total that are scheduled to be introduced in the first half of the year. Including Monday’s shipment, 1,665,000 doses so far have been received in Korea, and the rest will be supplied sequentially until the first week of June.

This coming Wednesday, a fresh batch of the Pfizer vaccine is set to arrive at Incheon International Airport. Korea has been receiving new Pfizer vaccines every Wednesday.

A batch of 438,000 Pfizer doses arrived in Korea last week. So far, 2.874 million doses have been received out of the 7 million that are scheduled to be delivered by the first half of the year.

With new shipments of Covid-19 vaccines, Korea plans to resume administering the first doses of vaccines after they have been temporarily suspended as supplies ran out.

The task force team will resume offering the first jab of Pfizer to some 2.4 million people aged 75 or older and those at nursing facilities on Saturday. Inoculations for the group started in the beginning of April.

The administering of AstraZeneca vaccines will roll out from May 27 for some 5.15 million people aged 65 to 74 and patients of chronic respiratory diseases.

To encourage people to get vaccinated, those who suffer from side effects from the vaccine will be able to receive medical expense compensation even if they cannot prove a direct causal link between the vaccine and the symptoms from Monday.

Previously, government compensation for vaccine side effects was limited to cases where cause and effect were proven.

According to the vaccination task force, people who are hospitalized in intensive care units or suffer from illnesses of an equivalent degree but do not have proof of the condition being related to inoculation will now be eligible to receive medical expense compensation.

The coverage will be up to 10 million won ($8,800) per person, and will be applied retroactively starting with those who experienced severe side effects before the implementation of the new scheme. Those eligible can apply at their local public health centers.

The financial support, however, does not include illness or injuries that “happened for reasons other than receiving the vaccine” or “clearly has no connection at all with inoculation.” It also does not cover expenses for treating underlying diseases, nursing or funeral costs.

Currently, six people meet the requirements, including those who were previously dismissed by health authorities due to a lack of proof before the implementation, the task force team said.

"Through this system, we will provide more support for patients with severe abnormalities who were not within the scope of compensation due to lack of causality, so that people can receive vaccine shots with assurance," the task force team said on May 10.

The Busan Metropolitan Government will provide extra medical expenses from Monday to local residents who showed severe side effects after getting their vaccines, on top of the country’s payout scheme.

Busan Vice Mayor Lee Byung-jin announced last Friday that the city will provide up to 10 million won to cover medical treatment costs if they exceed the government financial aid. 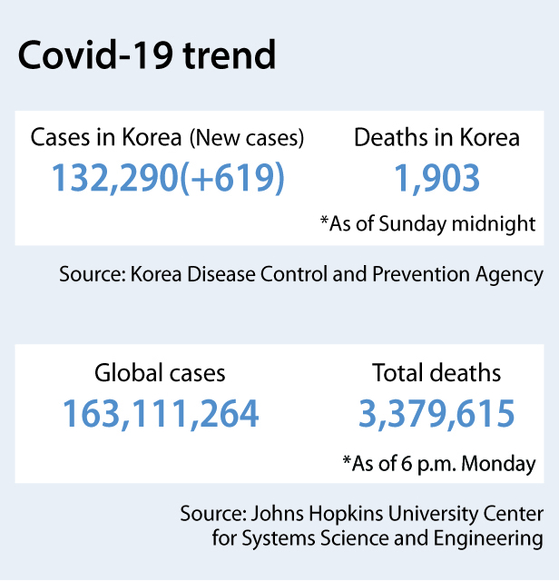 Korea reported 619 new Covid-19 cases, including 597 local infections, raising the total caseload to 132,290. This is the highest Monday record in four months, as records in Monday are usually lower compared to other days due to fewer tests conducted over the weekend.

There were three additional deaths, raising the death toll to 1,903.