Talent development and management company HYBE's educational subsidiary HYBE Edu will collaborate with the International Korean Education Foundation to create supplementary textbooks, which will be used in Korean classes in elementary and middle schools abroad, according to HYBE Edu on Tuesday.

HYBE Edu announced that it recently signed a business agreement with the foundation to develop supplementary textbooks for teaching Korean abroad.

HYBE Edu has already been producing Korean textbooks using intellectual property related to the boy band BTS, the most successful artist under its music label HYBE. Its first Korean curriculum "Learn! Korean with BTS" which was developed last year in collaboration with the Korea Foundation has been adopted by the University of Sheffield in Britain, Middlebury College in the United States, École Normale Supérieure and Edhec Business School in France, Ain Shams University in Egypt, Hanoi National University of Foreign Studies and Thang Long University in Vietnam. 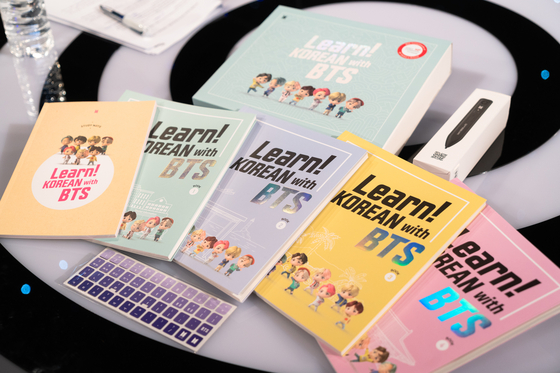 
Through this business agreement, HYBE Edu will officially kickstart the promotion of Korean language education within public education systems abroad. HYBE Edu says the completed supplementary textbook will be distributed to elementary and middle schools abroad via the Korean Ministry of Education.

"We will continue to create online and offline educational content using BTS-related intellectual property so that adolescences around the world can learn the Korean language and culture in a fun and effective way," said a HYBE Edu official.