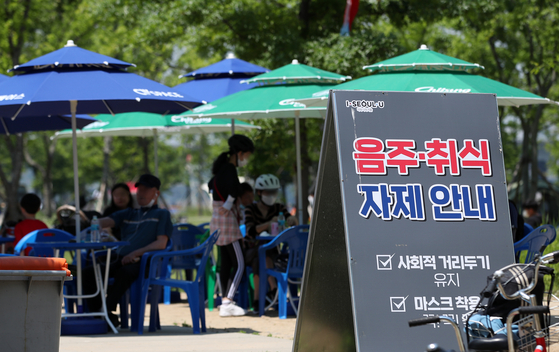 An information sign at Yeouido riverside park in Seoul advises visitors to refrain from consuming food or alcohol on Thursday. [NEWS1]


Controversy is brewing over a plan being weighed by the Seoul city government to ban alcohol consumption at all parks along the Han River following the death of a 21-year-old medical student after a night of drinking and other alcohol-related accidents at riverside parks.

Park Yoo-mi, an official working in disease control efforts at the Seoul city government, said in a daily press briefing Friday that the city is considering a ban at all 11 Han River parks — some of the most popular outdoor recreational areas in the city.

“We are currently developing plans to create no-drinking zones in the Han River parks in accordance with the National Health Promotion Act,” Park said. “Related bureaus of the city government are reviewing how to proceed with a ban on alcohol consumption and to which hours it would apply.”

The city’s announcement sparked an outcry from those of the opinion that the proposed measures were overly restrictive, while also eliciting support from those who feel public drinking is too lightly regulated in Korea.

A university student in his 20s, who asked only to be identified by his surname Lee, says he often goes to the Ichon park on the northern bank of the river and thinks a total ban on drinking was unfair to most park visitors.

“I do think we need to have preventative measures to stop accidents resulting from excessive drinking, but most people who go to the parks drink only one or two cans of beer,” Lee said.

However, a public petition to the Blue House that garnered more than 6,000 signatures by Thursday asked for measures to outlaw alcohol consumption at riverside parks altogether.

“There is a need for Seoul to pre-emptively conduct research and consult [with people] to swiftly revise its own legislation for the purpose of creating a healthy drinking culture,” Kim said in a Facebook post Tuesday.

The city government is able to prohibit alcohol consumption in designated areas under a recent amendment to the National Health Promotion Act, which comes into effect on June 30. The law allows local governments to designate some public places as alcohol-free zones at their discretion and impose a fine of 100,000 won ($90) for violations.

The city’s plans follow the death of 21-year-old medical student Sohn Jeong-min, who was found dead in the river late last month. Sohn was drinking with his friend at Banpo Han River Park in Seocho District, southern Seoul, into the early hours of the morning. He is said to have disappeared before his friend awoke, and was found dead floating near a water taxi boarding platform six days later.

In another alcohol-related incident on Monday, a 20-year-old man was rescued from the river at Jamsil Han River Park in Songpa District, southern Seoul, after falling into the water as he bent over to vomit, according to Songpa police.

Curbing Covid-19 infections in the summer, when warm weather draws crowds to the Han River for outdoor exercise and picnics, is another reason behind the possible ban. On Thursday, the city government said it will urge people to refrain from eating and drinking at the Han River and to return home early.

However, mindful of a backlash, Seoul Mayor Oh Se-hoon said at a press conference on Monday that a ban would not be imposed immediately.

“We will hold public consultations by conducting a campaign of about six months to a year,” Oh said.

“There will be no sudden ban on chimaek [fried chicken and beer] at the Han River.”