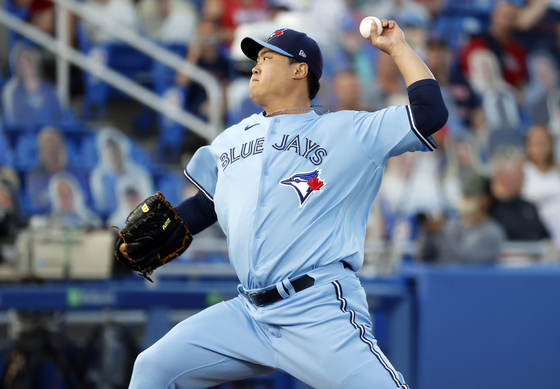 Ryu picked up his fourth win of the season, and his third consecutive W in May, against the Red Sox, allowing just four hit with no walks while striking out seven to lower his ERA to 2.51.

The Korean southpaw started things off with four pitch strike at the top of the first, before allowing one of his only hits of the game to Alex Verdugo. The Red Sox had no chance to capitalize on the early knock, as Ryu quickly forced a flyout in foul territory and then added a strikeout to end the inning.

Ryu retired the Red Sox in order in the second and third innings, using a mixture of groundouts and strikeouts to make quick work of the AL East leaders.

The fourth started a little shaky, with Verdugo once again getting a good read on Ryu's pitch to send a double into right field.  The Blue Jays got the next out, but a single from Xander Bogaerts took Verdugo just 90 feet from home plate with only one out. Ryu didn't flinch, popping out the next man up and then forcing a flyout to end the inning.

Ryu made short work of the fifth inning, retiring the side in eight pitches, although Hunter Renfroe did record a single but was forced out trying to stretch it into a double.

The sixth and seventh passed without incident. Enrique Hernandez reached first on a fielding error to start off the sixth, but Ryu struck out two with one flyout to end the inning. Two groundouts started off the seventh, with Ryu adding one more strikeout to finish his time on the mound.

Ryu was replaced with Travis Bergen at the top of the eighth.

Tuesday's dominant performance is a good start to the series for the Blue Jays, who currently trail the Red Sox at second in the AL East. If the Canadian club is able to take the series at their temporary home in Dunedin, they could also take the top stop in the division.

Ryu now has four wins and two losses with a 2.51 ERA after eight appearances this season. He has looked particularly strong in May, picking up three wins in three games with 19 strikeouts and just two walks. He allowed five runs in 19 innings, with a 2.37 ERA for the month.