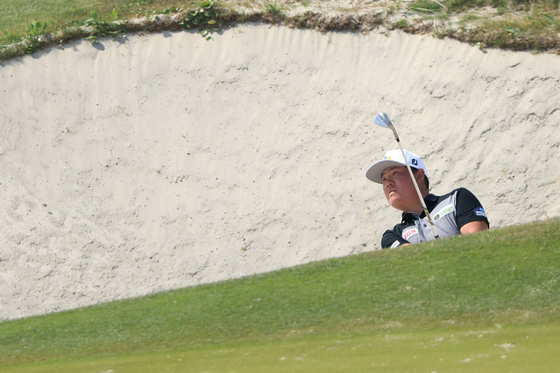 Im Sung-jae plays from a bunker during a practice round prior to the 2021 PGA Championship at Kiawah Island Resort's Ocean Course in South Carolina on Tuesday. [AFP/YONHAP]


The 2021 PGA Championship tees off tomorrow, with 156 golfers heading to Ocean Course in Kiawah Island, South Carolina, for the second major tournament of the year.

Among that field are a number of Korean contenders, including Lee Kyoung-hoon, fresh off his victory at the AT&T Byron Nelson last week, Im Sung-jae, the highest-ranking Korean at No. 26 on the Fedex Cup Standings, and Kim Si-woo, who won The American Express in January this year.

Lee, Im and Kim will all be hoping to make history by adding their names to the very short list of Koreans that have won a major tournament this weekend, a list that currently only features one name — Yang Yong-eun.

Yang was the first Asian ever to win a PGA major tournament, winning the PGA Championship in 2009. It took 12 years before Hideki Matsuyama became the second Asian on the list, at the Masters Tournament earlier this year. Yang thinks it won't be long before that list gets a bit longer.

“Twelve years have passed since the first Asian win in a major and Hideki subsequently won," Yang said earlier this week. "I really think more Asian players will go on to win major titles now.

"Players who can potentially win are Im Sung-jae, Kim Si-woo Kim, An Byeong-hun and Lee Kyoung-hoon. They are potential candidates to be our next major champion. As for Hideki, now that he has already won the Masters and several other PGA tournaments, I can only see him setting a record for most PGA Tour wins by an Asian player as long as he keeps his focus on the game.”

Lee certainly has the most momentum going into the tournament, having earned a chance to compete after winning his first PGA tournament just last week.

“One of the good things that came with my win was getting a spot in the PGA Championship and the Masters next year," Lee said in a pre-tournament press conference. "Sunday was challenging due to the weather and the (two hour) suspension, so I felt a little tired. However, I am be fully charged for the PGA Championship."

After looking strong last year and earlier this season, Im has struggled in the last few weeks, failing to make the cut in three of his last five tournaments. He will be looking to bounce back at the PGA Championship this weekend, with not only the major title on the line, but also the Olympics rapidly approaching.

Lee's sudden turn of form has made competition tighter for the Korean Olympic team. He jumped from 137th to 59th in the world rankings, putting him just behind Kim, at 50, while Im is at 23. The top two-ranked Koreans as of June 21 will go on to compete at the 2020 Tokyo Olympics.