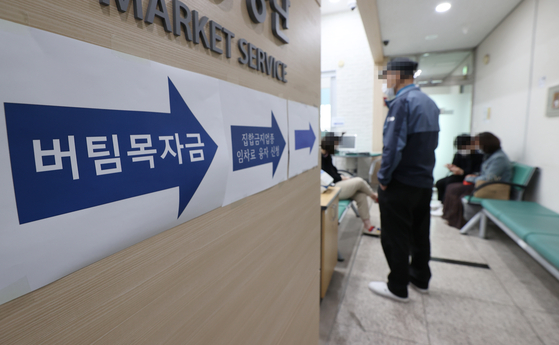 
Household income was flat in the first quarter and would have been negative if it were not for government subsidies and emergency relief funds.

Income earned through labor and by business fell, indicating that while the economy is recovering, the recovery is imbalanced and shallow.

Businesses that depend on face-to-face contact remain especially challenged as social distancing restrictions remain to a certain extent in effect.

According to Statistics Korea on Thursday, in the first quarter average household monthly income was 4.38 million won, up 0.4 percent on year.

Transfer income surged 16.5 percent, with public transfers up 27.9 percent and private transfers down 1.6 percent. Middle-income Koreans were the biggest beneficiaries of transfer income.

“There has been a relatively significant increase in public transfer income for people in the middle-income group because the ratio of self-employed business owners is high, making them eligible for the government relief grant,” said Chung Dong-myung, head of social statistics planning at Statistics Korea.

In December, the National Assembly approved an emergency relief grant that provides up to 3 million won for small business owners whose businesses were affected by the heightened social distancing regulations.

The emergency relief grants have been distributed since January.

In March, another emergency relief grant was approved with a maximum of 5 million won for each recipient.

“Labor and business incomes both shrunk as the resurgence of Covid-19 has affected the jobs and businesses of those working in the face-to-face service industries including restaurants and hotels,” said statistics agency official Chung.

Spending in the first quarter grew year-on-year. It is the first on-year growth in the figure since the second quarter of 2020.

The statistics agency credited the economic recovery for the improving consumer confidence.

Average household monthly spending was 2.42 million won, which is a 1.6 percent year-on-year increase.

Spending on food and non-alcoholic beverages increased 7.3 percent on year as people continued to spend more time at home.

Spending on clothing and shoes rose 9.3 percent, while home appliance and service spending rose 14.1 percent. Education spending was up 8 percent.

Spending on alcohol rose 17 percent on year, the biggest jump since 2016.

“We are looking at the situation of shrinking labor and business income for the top 20 percent seriously,” Finance Minister Hong Nam-ki wrote Thursday.

The Finance Minister said the government is developing policies that will help boost the domestic market and create jobs in the second half.