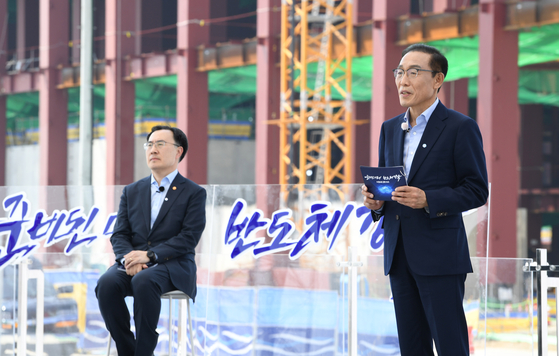 
Executives from major companies including Samsung Electronics, Hyundai Motor, Samsung Biologics and SK Bioscience flew to the United States to discuss semiconductors, batteries and coronavirus vaccines ahead of a summit between President Moon Jae-in and his U.S. counterpart Joe Biden on Friday.

The Korean government is encouraging them to ramp up manufacturing capacity of chips, electric vehicles (EVs) and EV batteries in the U.S. in exchange for contract manufacturing of vaccines in Korea.

The businessmen will travel independently due to the pandemic, according to the reports.

Kim is expected to finalize a pending investment of $17 billion on a new chip plant in Austin, Texas during his visit.

In a proposal submitted to the Texan state government, the chipmaker stated that the facility will be designed to “produce advanced logic devices for Samsung’s foundry business” with an aim of breaking ground in this quarter and completion in the fourth quarter of 2023.

Samsung Biologics is expected to strike a deal to manufacture Covid-19 vaccines here in Korea for Moderna.

Asked if it is in talks with Moderna for the manufacturing of its vaccines earlier this week, Samsung Biologics said that it would confirm news reports in a month or less, avoiding a direct answer.

Expectations for a possible vaccine deal are running high as Health Minister Kwon Deok-cheol will fly to the U.S. on Friday, according to the Ministry of Health and Welfare.

“The chairman left for the U.S. to attend an event at SK Innovation’s battery factory in Georgia, where President Moon will visit on May 22,” a spokesperson at SK Inc. said, although the spokesperson was not sure whether the two executives departed together.

SK Bioscience will likely extend its licensing deal with American bio firm Novavax for its NVX-CoV2373 coronavirus vaccine through next year. SK
Bioscience currently has exclusive rights to manufacture, gain approval and sell the vaccines in Korea but only through the end of this year.

The biopharmaceutical company declined to confirm the purpose of Ahn's trip.

Hyundai Motor and its sister company Kia released a plan last week to invest $7.4 billion in the U.S. through 2025 to produce electric vehicles.