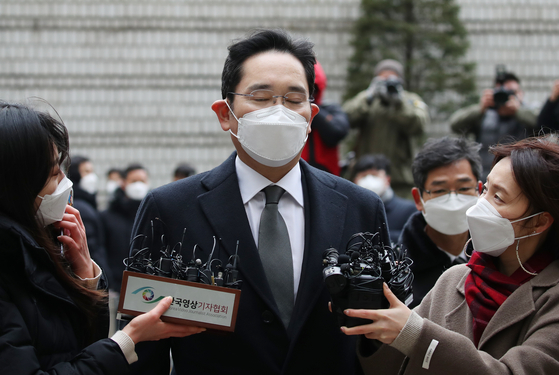 Samsung Electronics Vice Chair Lee Jae-yong on his way to attend a Jan. 18 hearing where he was sentenced jail term of 30 months. [YONHAP]

The American Chamber of Commerce in Korea (Amcham) has asked the Blue House to pardon Lee Jae-yong as Samsung Electronics continues to consider a $17 billion investment in the United States and just days ahead of President Moon jae-in's meeting with President Joe Biden.

Lee, Samsung's vice chairman, was sentenced to a 30-month jail sentence for bribery and other offenses related to former president Park Geun-hye and has completed half the sentence.

The letter sent by Amcham Korea last week argued that the absence of Lee could endanger Korea's status as a strategic partner of the United States, which is pushing to localize semiconductor supply.

Amcham declined to release the letter and would not comment on whether it was appropriate for a foreign business lobby to weigh in on the judicial deliberations of its host country, other than to say in a statement that the letter was strictly non-political and it does not reflect the views of the U.S. government.

"It is critically important to the U.S. that Samsung be an active participant in the investment decisions in the U.S. going forward," he said in a statement, adding it is the organization's core mission to facilitate Korean investment into the U.S.

"We are concerned that the current issue facing the leader of Samsung Electronics can be a significant distraction to Samsung's support of the semiconductor industry in the U.S.," he wrote. "We conveyed this opinion to the Korean government in the hope that it would be helpful for them to understand the importance of the issue for both economies."

Samsung Electronics is the world's second largest chip maker and was the only Korean company invited to a White House teleconference last month bringing together chipmakers and major users of semiconductors.

It is scheduled to join a second meeting of major chip companies hosted by the U.S. Department of Commerce, Thursday, a day ahead of the meeting between the presidents.

"Samsung will be there at the summit, but it won't be the top leader representing the firm," an Amcham spokesman said. "If Lee was there to directly engage in the talks, the discussions could be more constructive. The letter was to express regret from an economic perspective."

Even before the recent Amcham letter, Kim has spoken out in favor of Lee's release.

"It's really disappointing," he told reporters during a press conference in January, just a few days after Lee's sentencing. "Samsung is such an important company originated in Korea with significant global leadership."

Amcham Korea, one of the country's oldest business advocate groups, currently has 800 or so corporate members, mainly U.S. companies that do business in Korea.

The message emphasized the importance of semiconductors, especially as demand for computing power has skyrocketed as a result of the pandemic.

Lee's imprisonment would delay investment decisions and pose risks to Samsung Electronics and Korea's economy, they argued, especially at a time when foreign governments are offering generous support plans for chip investments.

Soon after the April letter was sent, a senior presidential aide said the Blue House was not considering a pardon and had no plan to do so.  But recent media reports suggest that it might be giving it a second thought.

Sources close to the administration told the JoongAng Ilbo last Friday that the Blue House and the ruling party are actively considering a presidential pardon for the Samsung leader on Aug. 15, Liberation Day. In Korea, it is a tradition for presidents to grant pardons on this day.