Universities short of students will need to make adjustments

Universities short of students will need to make adjustments 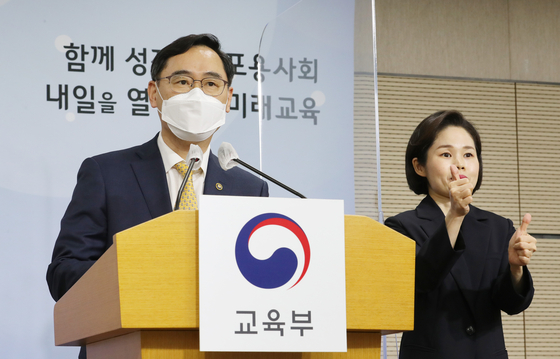 Vice Minister of Education Jung Jong-chul speaks to the press on Thursday at the ministry headquarters in Sejong. [YONHAP]

Universities across the nation struggling with a dearth of students will be asked to restructure their administration or even shut down completely, the Ministry of Education announced Thursday.

“We are seeing a speedy reduction in the size of the population consisting of students, and a shortage of students across universities especially in those located [outside of greater Seoul],” the ministry said in its statement on Thursday. “The ministry hereby announces its intention to help restructure colleges.”

Starting 2022, the ministry will examine the financial state of colleges with severe debt and issue recommendations on restructuring their college administration, including reducing the size of staff and students. It will provide funding and consulting to help resuscitate the colleges, but if the colleges do not cooperate, the ministry said it may issue a directive to shut them down.

Colleges struggling to fill their student quota are mostly located outside of the greater Seoul area, consisting of Seoul, Incheon and Gyeonggi.

The total student shortage throughout colleges this year was 40,586, according to the ministry, of which 75 percent were from colleges located outside of the greater Seoul area.

Additionally, the ministry will ask 143 universities, currently being funded by the government to carry out a self-diagnosis and revamp their administration and business strategies, to submit specific plans on reform by March next year. These universities are located across the nation, including in Seoul.

The plans could include a general reduction of the student body and staff members, a change of the university’s focus away from undergraduate programs, which is where most universities are seeing dwindling student numbers, to graduate programs or night schools to increase its student body by catering to those in the work force, or transforming an undergraduate school into a school for retirees.

The ministry will provide consulting, funding and other administrative or financial assistance to help the colleges follow through with its plans.

“Further details on this plan will be announced later in the year,” the ministry said.

The ministry added that it will also be providing funding for colleges to pool resources with each other, such as by sharing classes, professors and high-tech labs and other technological infrastructure.

As one example, Hanyang University has opened its hologram classes on artificial intelligence to six other universities, including Eulji University in Gyeonggi, Kwangju Women’s University in Gwangju and Baekseok University in South Chungcheong, this spring semester.

“The early 2000s was when Korea’s birthrate started dipping severely, so it’s not surprising that these years we are seeing less and less students in college,” the ministry said. “The crisis of universities is not limited to the academia, but it has effects in the local and national economy. The issue needs to be addressed speedily and thoroughly. Universities will be encouraged to reform in ways that they can help each other survive and also be at the forefront of the fourth industrial revolution.”

Korea’s fertility rate, or the average number of children born per woman, was 1.1, according to UN Population Fund in 2021. It was the lowest amongst 198 countries surveyed.