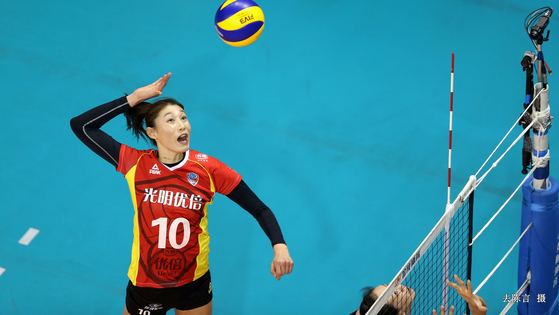 Kim Yeon-koung returns to the Shanghai Bright Ubest Women's Volleyball Club after four years. Kim led the Shanghai club to come out on top in the regular season in 2017. [CHINESE VOLLEYBALL ASSOCIATION]


After playing just a season in Korea, Kim Yeon-koung will once again be jetting off next season — this time to Shanghai.

Kim returned to the Incheon Heungkuk Life Pink Spiders for the 2020-21 V League season after 11 years playing in Japan, China and Turkey.

Kim is now joining the Shanghai Bright Ubest Women's Volleyball Club, returning to the team four years after she led it to the top of the Chinese Super League in the 2017-18 season to snap a 17-year drought. The team finished runner-up in the championship that year.

"Kim signed a contract with the Shanghai club," her agent told the JoongAng Ilbo on Wednesday.

Though details are not yet available, the contract is likely to be for one year.

Generally accepted to be the greatest volleyball player Korea has ever produced, Kim’s future plans have been at the center of attention since the end of the 2020-21 V League season.

The Incheon Heungkuk Life Pink Spiders were ready to make her a generous offer and made it clear that they had no intention of trading Kim when the new women’s volleyball club of the Pepper Savings Bank displayed interest last month.

However, it was unlikely that Kim would stay in the V League, as she has played the majority of her career overseas.

One of the reasons Kim chose the Shanghai club may have been because of the shorter season.

This V League season was a restless one for Kim as she played in a total of 41 games, including the KOVO Cup, all regular season games and the championship playoffs.

Right after the season ended, Kim joined the national volleyball team to train for the 2021 FIVB Volleyball Women's Nations League that starts on Tuesday in Rimini, Italy. Then, she will go straight to Tokyo to compete at the Olympic Games.

“Kim pushed herself this year,” her agent said.

“The Chinese league shortened their last season, competing in one city instead of alternating between home and away games. It seems this season will be done in a similar way.”

Kim is currently at the Jincheon National Training Center in Jincheon, North Chungcheong, and will fly to Italy with the national team on Friday to compete at the Volleyball Nations League.