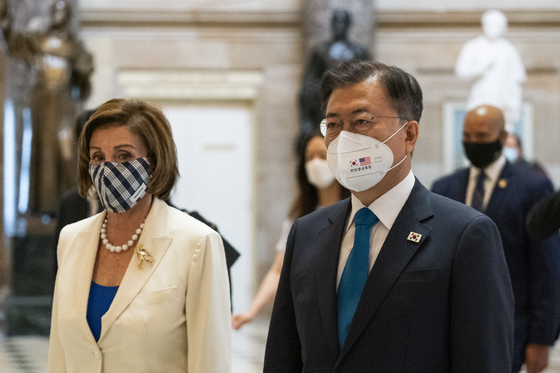 
SEOUL, WASHINGTON — Nancy Pelosi, speaker of the U.S. House of Representatives, expressed hope that justice will be served for the Korean victims of Japan’s wartime sexual slavery.

Pelosi made the remarks during a meeting with President Moon Jae-in on Capitol Hill Thursday on the eve of Moon’s summit with U.S. President Joe Biden.

“Speaker Pelosi said the House of Representatives passed a resolution on comfort women in 2007 and she had addressed the issue multiple times when she met with Japanese Prime Minister Shinzo Abe in the past,” Chung said. "She said she wants to see justice for the comfort women.”

According to a senior presidential source, Moon made no particular response to Pelosi’s remarks on the sensitive comfort women issue. “It was just a part of their conversation,” he said.

Bilateral relations between Korea and Japan deteriorated after Moon took office in 2017 and scrapped an agreement to settle the issue of Japan’s wartime sexual enslavement of Korean women, signed in 2015 by his predecessor. No sign of improvement has been seen since.

Pelosi has been an advocate for justice for the victims of Japan’s wartime sexual slavery. When the House passed a resolution in July 2007 calling for Japan to formally acknowledge and apologize for its military’s sexual slavery of young women during its occupation of Asia and the Pacific Islands during the World War II era, Pelosi issued a statement in support of the resolution.

“More than 50 years later, the Japanese government has still not issued a clear apology to the 'comfort women’,” she said in that statement. “This is disappointing because Japan is a critical ally of the United States and a leading international voice on issues such as global warming and assistance to the poorest people in the world.  Yet in this case, the Japanese government should do more to recognize these injustices.”

During the meeting with congressional leaders, Moon and Pelosi talked about the importance of the Korea-U.S. alliance, Chung said.

“The president requested active support from the U.S. Congress to strengthen the two countries’ cooperation on denuclearization and a permanent peace regime for the Korean Peninsula, efforts to overcome the Covid-19 pandemic, restructuring of global supply chains and climate change,” Chung said.

“The Korea-U.S. alliance is the most exemplary alliance in the world,” Moon was quoted as saying. “I promise that we will continue to move toward the same direction in the future.”

Moon also discussed the upcoming summit with Biden, scheduled for Friday at the White House.

“The Biden administration recently completed a review of North Korea policy, and Korea and the United States have cooperated closely during this process,” Moon was quoted as saying. “The Korea-U.S. summit, the second face-to-face summit for Biden, is taking place at this crucial time, and it is also my first overseas visit since the pandemic.”

Pelosi stressed the importance of the Korea-U.S. alliance.

“We also know that our friendship is strengthened by the presence of 28,000 U.S. troops in Korea, in South Korea,” she said in opening remarks. “And, over time, hundreds of thousands of Americans have been able to have an appreciation for the ... importance of our relationship.”

In addition to Speaker Pelosi, other leaders from both sides of the aisle of the House, including House Majority Leader Steny Hoyer and House Republican Whip Steve Scalise, attended the meeting with Moon. Four Korean-American legislators joined the meeting.

Conspicuously missing from the talks between Moon and House leaders was any mention of U.S. lawmakers’ concerns over a  Korean law that bars the sending of anti-Kim Jong-un propaganda to the North. Last month, a congressional hearing took place to address the issue and lawmakers expressed concerns that the law restricted freedom of speech.

According to a presidential source, no discussion took place about the propaganda ban.

The source also said no discussion took place between Moon and the congressional leaders on cooperation over Covid-19 vaccines.

“Major events on vaccine cooperation will take place [Friday],” he said. “There are events being held between companies from the two countries and the governments are also having talks.”

Moon, who arrived in Washington Wednesday, started his official schedule with a visit to Arlington National Cemetery on Thursday. He presented a wreath at the Tomb of the Unknown Soldier and then visited the Franklin Delano Roosevelt Memorial. 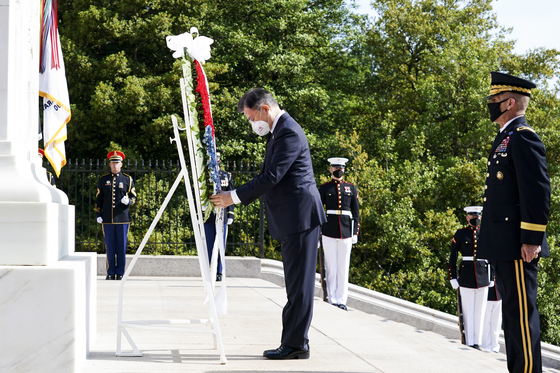 President Moon Jae-in presents a wreath at the Tomb of the Unknown Soldier at Arlington National Cemetery on Thursday. [YONHAP]


Moon and Biden will announce the outcome of their talks in a joint press conference later Friday.