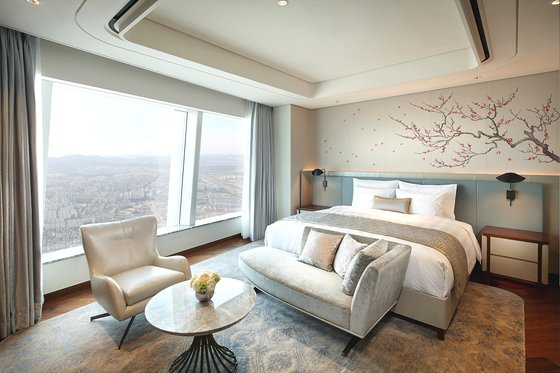 A view of a room included in the Signiel Seoul's Once In a Life package. [LOTTE HOTELS & RESORTS]


Hotels are trying to entice locals to come and stay – and not just for a brief weekend "staycation."

The hotel industry, of course, has been hit incredibly hard by the global Covid-19 pandemic. Their main source of income – travelers from overseas – were frozen out.

So hotels are offering unique promotional deals to appeal to domestic guests who may be interested in finding a place to spend their saved-up travel budget.

Mr. Kim, a 30-year-old office worker, is currently staying at a four-star hotel in Seoul. Tired of the one-hour commute from his home in Bucheon, Gyeonggi to his job in Gangnam District, southern Seoul, and frequent nights working late, Kim decided to pay for a stay at a nearby Gangnam hotel. The normal rate for a room was 100,000 won per night, but the hotel offered Kim a monthly rate of 1.5 million won ($1,300).

He signed on for a whole month.

“I can’t travel abroad, so I thought, why not go on a hotel staycation?” said Kim. “Instead of wasting my time on the subway, I eat hotel breakfasts and spend time working out at the gym after work.”

Lotte Hotels & Resorts started offering a one-month staycation package called Once In a Life at the Lotte Hotel Seoul last March, selling 20 in the first week. The deal offered a 30-night stay for one, with some services thrown in for free such as daily laundry and access to the fitness center. The price of the package was 2.8 million won. The Signiel Seoul, a luxury hotel run by Lotte Hotels & Resorts in the Lotte Tower in Jamsil, southern Seoul, offers a similar one-month package for 10 million won. Despite the higher price, five of Signiel Seoul's monthly packages were sold.

“Many are spending money on staycations instead of travelling abroad, and demand for hotels, a place where people can work and rest at the same time, is on the rise,” said a spokesperson for Lotte Hotels & Resorts.

Lotte Hotel & Resorts first offered its monthly Once In a Life staycation package at properties in Seoul. Month-long packages are now offered at 16 properties, at different prices, including the Lotte Hotel Jeju, L7 Hongdae and L7 Gangnam.

Long-term guests help increase hotels’ occupancy rate, even if the packages are priced on the low side.

“Before the pandemic, we used to have an occupancy rate of 70 percent, but we now linger at 40 percent,” said a spokesperson for one of Seoul’s big hotels. “Extended stays are helping us financially.”

“Office workers in their 20s and 30s want a place where they can work and rest, and some even rent hotels for the long-term for a staycation or as a temporary residence while their home is going through renovation,” said Kim Byung-joo, the CEO of Living In Hotel.

According to Kim, hotels near Korea’s well-known education hub, Daechi-dong in southern Seoul, became home to many middle and high school students from outside of Seoul for a while. They rented rooms by the month to attend hagwon (cram schools) when schools were temporarily closed due to Covid-19.

Hotel restaurants are also seeing an increase in customers, one unexpected repercussion from the pandemic. Andish, a buffet restaurant located in the Gravity Seoul Pangyo, a hotel owned by Shinsegae Chosun Hotel, has been booked up this year. Parents in the Bundang, Gyeonggi area are known to often visit the venue for brunch after sending their kids to school. Restaurants in Seoul hotels such as Westin Chosun Seoul and The Shilla Seoul are also packed.

“People are hesitant to go to local restaurants due to the pandemic, and many are turning to hotel outlets because they believe hotels have stricter safety standards in terms of sanitization and disinfection,” said a spokesperson for the Westin  Chosun Seoul. “Most of our customers in the past were business people coming for meetings, but parents and people in their 20s are visiting more often.”

With an increasing number of people in their 20s visiting hotels, businesses are trying to understand the new demographic better. Some hotels are selling accommodation packages on live commerce shows, platforms the younger generation likes, such as Kakao Shopping Live.