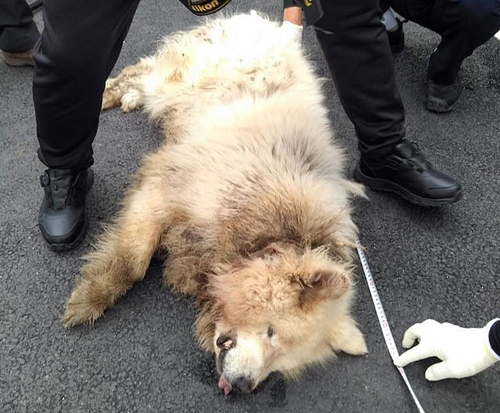 Police inspect the dog which bit and killed a woman in Namyangju, Gyeonggi, on Sunday. [YONHAP]


A 59-year-old woman was bitten and killed by a stray dog in Namyangju, Gyeonggi, on Saturday.

According to the Namyangju Northern Police Precinct, a passerby found the woman bleeding on a hill in Jingun-eup, Namyangju, at around 3:25 p.m. and reported the scene to emergency services.

At the time of her discovery, the woman was unconscious due to a serious wound on the back of her neck and had already entered cardiac arrest. An ambulance transported the woman to a nearby hospital, but she died an hour later.

Police and paramedics captured and tranquilized on Sunday a large mixed-breed dog found nearby which is believed to have bitten the woman. Closed-circuit video surveillance (CCTV) footage from the scene of the fatal attack showed the same dog rushing up to the woman to bite her.

Approximately 150 centimeters (60 inches) long, the dog weighed about 30 kilograms (66 pounds) and had matted yellow fur. Experts judged it to be a cross between a Samoyed and a pungsan, which is a Korean hunting breed.

Police are now attempting to track down the owner of the dog by reviewing and making inquiries in the area.

Although the owner of a nearby dog farm was suspected of having accidentally let the dog loose, he denied ownership of the dog.

Attacks by dogs on humans and other animals have gained attention in Korea in recent years.

In one particularly publicized incident, singer-actor Choi Si-won’s French bulldog bit a restaurant CEO in October 2017 in an apartment complex where both parties lived.

The CEO died of blood poisoning three days later, leading to criticism of Choi and his family for not having the dog on a leash. However, the CEO’s family declined to file a criminal complaint against Choi.

In an incident which did lead to a criminal prosecution, a Rottweiler on a walk bit a small white pet dog, killing it, in Eunpyeong District, northern Seoul, last July. The owner of the Rottweiler faces criminal charges, with police viewing the dog’s record of attacks as evidence of owner negligence.

The incident in Namyangju on Saturday is the latest in a spate of fatal dog attacks on both humans and their pets in recent years, which have led to calls to both tighten laws on dog ownership and training and to revise assumptions about the danger of certain breeds.

Currently, certain dog breeds are defined as “ferocious,” and people who want to own such dogs are required to purchase insurance to cover any damages resulting from their dogs’ behavior.

However, Prof. Lee Woong-jong of Yeonnam University pointed out that the assumptions about “ferocious” breeds and friendly ones is misplaced.

“Even a breed like the Golden Retriever, which is known to be docile, can become ferocious depending on environmental factors,” Lee said.