Rockets fired by Hamas, a militant group representing Palestinians in Gaza, and interceptor missiles launched by the Israeli Army were the epitome of modern warfare, just like the Tomahawks fired from the Red Sea during the Gulf War. The casualties on both sides were somehow overshadowed by the amazing fireworks in the sky on May 10 as Hamas rocket attacks were effectively countered by Tamir interceptors launched by Iron Dome, Israel’s sophisticated missile-defense system. The system is believed to have knocked down 1,030 out of the 1,050 rockets fired by Hamas.

The missile defense system developed by Israeli defense company Rafael in 2011 can detect mortar shells and rockets fired within a 70-kilometer (43-miles) range and launch Tamir missiles to intercept them. Rafael is currently working on extending the missile’s range up to 250 kilometers and enabling the Tamir to intercept short-range ballistic missiles too.

Iron Dome proved its effectiveness before. When Hamas fired 421 rockets toward Israel in November 2012, the defense system intercepted 85 percent of them. Despite its high cost — $80,000 per missile — the dome noticeably reduced civilian damage caused by close-range rocket attacks from Gaza, a self-governing Palestinian territory controlled by Hamas. Following a U.S. Army contract with Rafael to adopt the missile system, NATO is considering purchasing it.

South Korea once considered the introduction of the Israeli missile defense system, but decided to develop a similar system on its own given the nature of the threat. (For instance, if Hamas shoots 1,000 rockets at a time, North Korea can fire tens of thousands of shells from its long-range artillery hidden in dense mountains.) Coupled with high expenses needed for the Israeli defense system, the Agency for Defense Development (ADD) under the Ministry of National Defense decided to develop so-called “K-Iron Dome” by as late as 2030 due to budget cuts. 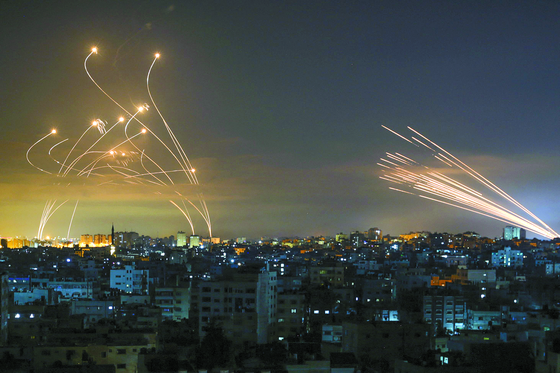 Missiles fired by the Iron Dome, Israeli’s missile defense system, intercept rockets launched by Hamas, a militant group of Palestinians in Gaza on May 14. [AFP/YONHAP]


South Korea’s military does not have weapons akin to the Iron Dome. About 340 long-range artillery weapons deployed across the border can fire up to 20,000 rounds per hour to targets 50 to 60 kilometers away, including in Seoul and Gyeonggi Province. In the first North Korean nuclear crisis in 1993, the Clinton administration planned to bomb the Yongbyon nuclear facility, but it had to give it up due to security concerns from the Kim Young-sam administration about North Korea’s possible retaliation with long-range artillery attacks that can devastate Seoul.

Things changed after South Korean military authorities came up with the idea of launching a “massive firepower operation” against the long-range artillery units across the border by mobilizing the Multiple Launch Rocket System (MRLS), short-range ballistic missile systems such as the Army Tactical Missile System (Atacms), the Korean Tactical Surface-to-Surface Missile (Ktssm), the 155-milimeter self-propelled artillery and a fleet of Air Force fighters. However, after learning of the South’s operation plan in the early 2010s, the North moved the position of its long-range artillery units northward to the slopes of mountains to make it hard for South Korea to aim at them.

But South Korea could not simply sit on its hands. After detecting the locations of the North’s mountain tunnels, South Korean military stealthily developed the Ktssm to better cope with another Yeonpyeong shelling by North Korea. Ktssm is a horror for the North Korean Army. Equipped with precision-strike capabilities, the missiles can hit the entrances of mountain tunnels. It can penetrate the three-foot-thick wall of a tunnel and then entirely destroy it.

As South Korea has yet to develop the K-Iron Dome, it has to suffer at least the first stage of the North’s long-range artillery attacks particularly for the initial 10 to 20 minutes. During the short period of time, North Korea can fire up to 5,000 shells at the Seoul Capital Area, with 3,000 landing on roads or in parks and the remaining 2,000 hitting buildings and homes.

Under such circumstances, you cannot ignore the massive damages in the initial stages of the long-distance artillery attack from North Korea. One of the solutions is to advance the development of K-Iron Dome or to bring in Israel’s. Developing a laser interceptor system is also urgent. South Korea has developed a 30-kilowatt laser weapon system, but advanced countries are developing 300-to-1,000-kilowatt laser systems, which can intercept not only shells but also ballistic missiles.

Unfathomable veto by China and Russia