Stocks decline for a third day as taper concerns weigh

Stocks decline for a third day as taper concerns weigh 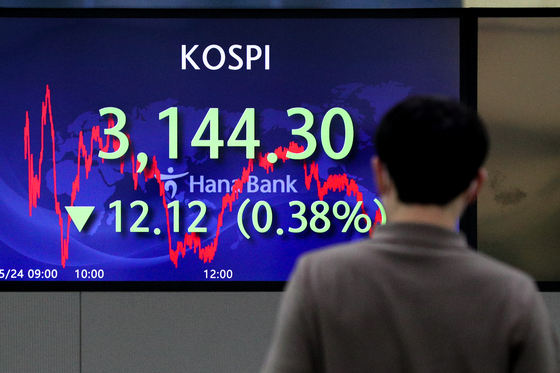 
The stock market extended its losing streak to a third session Monday, weighed down by concerns of early post-pandemic inflation. The won fell against the dollar.

The Kospi got off to a weak start as accelerating inflation may sap demand for risky assets.

Stocks dropped in the wake of the Federal Reserve's most recent minutes, which flagged the possibility of discussing the right time for the tapering of its asset buying program last week.

Philadelphia Fed President Patrick Harker said the Fed might have to discuss the matter sooner than later.

"Investor sentiment seems to have weakened from concerns that the Fed may speed up its tapering move, in addition to the recent plunge in the cryptocurrency markets," he noted.

Tech and bio shares retreated in Seoul, while bank and telecommunications shares advanced.

The local currency closed at 1,127.1 won against the dollar, up 0.1 won from the previous session's close.