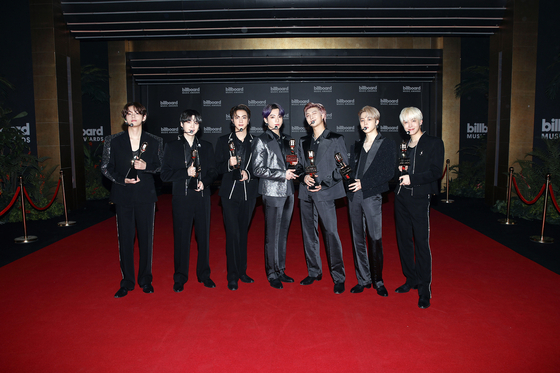 
BTS nabbed the Top Duo/Group, Top Song Sales Artist, Top Social Artist, and Top Selling Song awards at the 2021 Billboard Music Awards (BBMA) held on Monday, Korean time, setting a record for not only itself but for all of K-pop.

The 2021 BBMA was broadcast live from 9 a.m. on cable channel Mnet in Korea. This year’s event took place at the Microsoft Theater in Los Angeles, California, hosted by actor Nick Jonas.

BTS was nominated in four categories and ended up taking all of them home.

"Thank you, we love you and bless you," said RM in a message filmed from Korea, adding that the awards are "an honor." 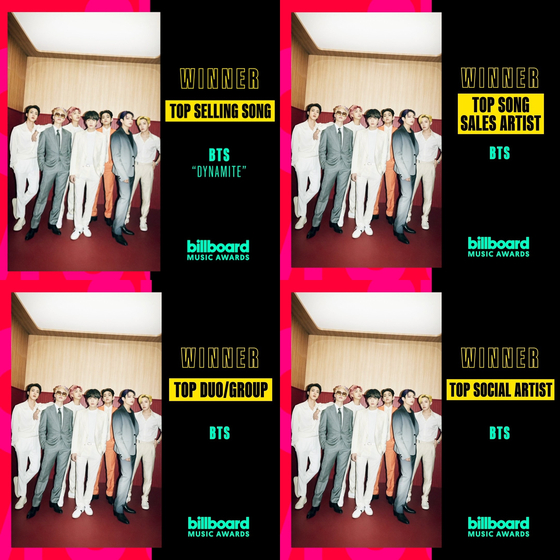 BTS was the first-ever K-pop band to win a BBMA award in 2017, the year that it was invited to the music award for the first time. The only other K-pop act to have won a BBMA award was singer Psy, whose megahit track “Gangnam Style” (2012) won him the Top Streaming Song (Video) awards in 2013.

BTS saw booming success last year with its all-English digital track “Dynamite,” which became the first-ever No. 1-ranking K-pop track on Billboard’s Hot 100 singles chart in September. The band was also invited to perform as a nominee at the awards ceremony — another first for any K-pop act. 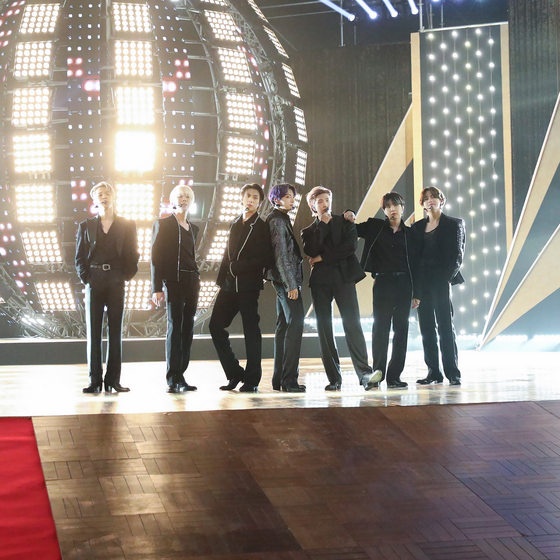 BTS performs its latest single ″Butter″ for the first time for the 2021 Billboard Music Awards held Monday, Korean time. The performance video was filmed in Korea due to Covid-19. [BILLBOARD MUSIC AWARDS]


This year for the BBMA, BTS performed its latest and second all-English digital single “Butter” for the first time. “Butter” was released on Friday and has since set the group on yet another streak of records.

It was streamed 20.9 million times on the day of its release on May 21 on global music streaming service Spotify, the highest number of streams ever recorded by the company. They also beat their own record, which was set at 12.6 million single-day streams with “Dynamite.”

“Butter” topped the iTunes Top Song Chart in 101 regions around the world, and its music video surpassed 100 million views after just 21 hours following its release.