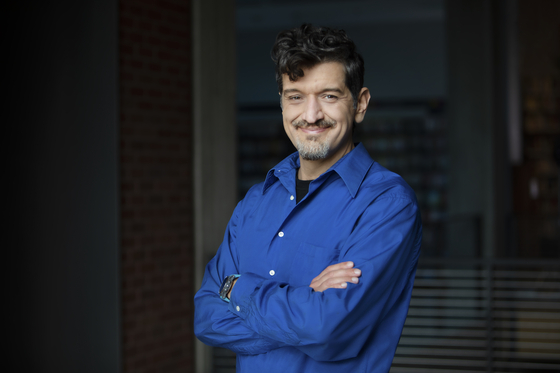 Director Enrico Casarosa poses for a photo at Pixar Animation Studios in California on Feb. 16, 2021. [PIXAR]


When we think of sea monsters, we usually imagine them to be grotesque, enormous yet magnificent creatures that burst from the depths, upturn ships and threaten the lives of voyagers.

Disney and Pixar’s animated film “Luca,” set in a warm seaside town on the Italian Riviera, describes sea monsters as ordinary beings like us who can transform into humans when they’re on land.

Two sea monsters, Luca and Alberto, turn into boys as they visit the nearby town out of curiosity, but they must be careful to keep their identity hidden: One splash of water, and their skin turns to the scaly original until dry.

Although the story is on the surface about two sea monsters exploring the town, the two protagonists remain at heart two insecure youths still grappling with who they are, their friendship and their dreams.

Director Enrico Casarosa, who will have his feature-film debut with “Luca,” said at a press event that the setting of the film is inspired by childhood memories, mainly based on adventures with his best friend Alberto.

“The idea of sea-monster kids felt interesting to me because as a kid I felt out of place and a little bit of a loser,” he explained at an online press event with Korean press on Friday. “My best friend and I connected, but we were feeling a little bit like outsiders, as I think at that age as we so often do, so the idea of having a secret and having to hide your sea monster felt really interesting.” 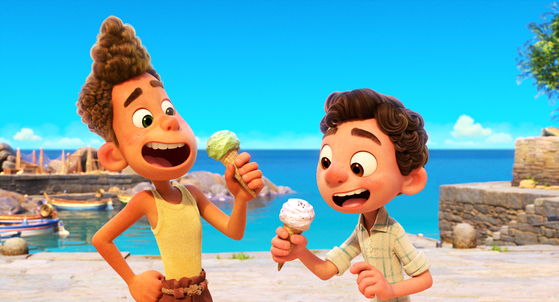 Set in a beautiful seaside town on the Italian Riviera, Disney and Pixar’s “Luca” is about two boys/sea monsters experiencing an unforgettable summer filled with gelato, pasta and endless scooter rides. [PIXAR]


Their transformation process from a sea monster to human was inspired by octopuses.

We looked at octopuses, which can transform,” he said. “They can even change the texture and color of their skin. We wanted to make the transformation feel like an adaptation, and they’re hiding their true sea-monster self.

“And we realized through the story that the most fun would be to every time water hits the skin it would turn into a monster,” he continued. “There would be a wonderful risk for our boys to be in town.

“These were very different technical things because you would have to figure out how the scales would retract and how the color would slowly pulsate and go away into their skin. We wanted the transformation to be wondrous, natural, a little bit magical.”

His film was influenced by Japanese animator Hayao Miyazaki, the works of which the director has been familiar with for years.

“I grew up in Italy with all kinds of Japanese animation in the 80s, so I fell in love with animation,” he said. “The first television series that I absolutely loved was ‘Future Boy Conan,’ [1978] which was an early work of Miyazaki. One thing I love about them specifically is that he takes the point of view of kids. He has this wonderful wonder and attention towards nature. I love that sense of having a child looking up at the world and appreciating small things around us. That’s why I thought the story of sea monsters coming out of the water and experiencing the world around us was a perfect to show us that point of view.”

The director says that he still keeps in touch with his friend who inspired him so much, stimulating him to take chances and push his boundaries.

“He loved to do different things all the time, and his family wasn’t around so much, so he was very free,” the director said about his friend. “I was more sheltered, so this was the moment where I got to push the boundaries of my world. We could run around the city and places maybe we shouldn’t be at at 12. He got into fun, exciting things, sometimes risky things. And we are still in touch. He’s in Italy, and he’s an air force pilot, so he had a really wonderful career.

“One anecdote I still remember is that one week he decided he wanted python as a pet, so he bought a snake, and we brought him into high school,” he said. “It was a small python, but he told me last year that he was so afraid of the python that his little sister had to feed the snake. I never knew this, but it made me laugh so hard. Obviously he was testing his fears in this way. I think he was so memorable to me because I feel I might not have come all the way to the United States and I might not have not taken all the chances I did in life if I hadn’t learned to take risks with him early on.”

The film, which premiers in some countries on Disney + on June 18, will be rolled out in local theaters next month.. Disney+ is not yet available in Korea.