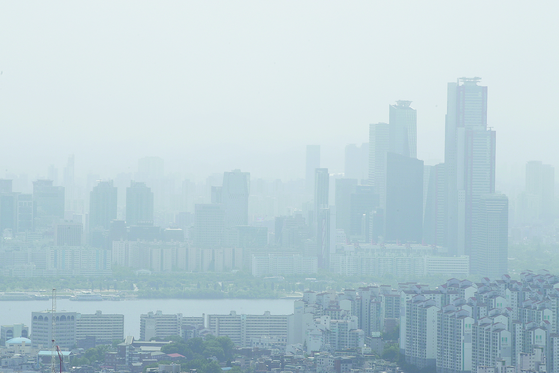 
The yellow dust flying in from Inner Mongolia and the Gobi Desert will spike fine dust levels nationwide through Tuesday, the Korea Meteorological Administration (KMA) reported.

“Yellow dust flying in from Inner Mongolia reached the western coasts of Korea by Monday morning, and has traveled over Seoul, Incheon, Suwon, Hongseong and Sokcho by the afternoon,” the national weather agency reported Monday. “The yellow dust is expected to move southeast and cover most of the country.”

PM10, or dust particles with diameters less than 10 micrometers, are carcinogenic and travel through the respiratory tract into the bloodstream and may cause strokes, heart disease or lung cancer, according to the World Health Organization (WHO). The WHO recommends exposure of no more than a daily average of 50 micrograms of PM10.

The KMA added that the PM10 particles, in addition to the smaller PM2.5, will likely lead to worsened air quality throughout the country through Tuesday. According to Air Korea, which is affiliated with Korea’s Ministry of Environment, the levels of PM2.5 around 3 p.m. Monday was 37 micrograms in Seoul, 39 micrograms in Gyeonggi, 27 micrograms in South Chungcheong, 22 micrograms in Daegu and 14 micrograms in Jeju.

PM2.5 particles are particles less than 2.5 micrometers in diameter and about 30 times smaller than the width of a human hair. The WHO describes them as carcinogenic, and studies have pointed to the deadlier effects PM2.5 particles can have on humans, compared to PM10 particles. The WHO recommends daily exposure of no more than 25 micrograms of PM2.5.

To dust we return