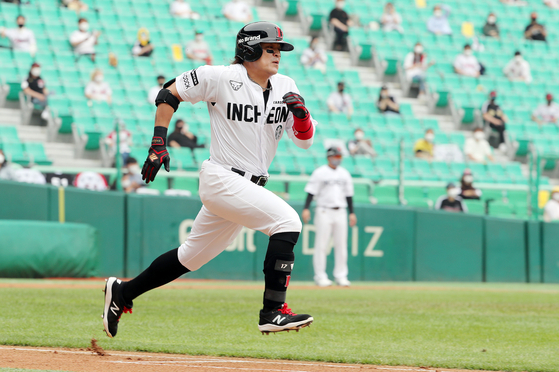 Choo Shin-soo of the SSG Landers runs to first after hitting an RBI single in the first inning against the LG Twins at Incheon SSG Landers Field on Sunday. [NEWS1]


The SSG Landers took the lead in the KBO over the weekend, winning all three games against the LG Twins to knock the Seoul club from second to sixth in three days.

It was a good weekend to stay home, with all five series falling to the home side. The Kiwoom Heroes pulled off the only other sweep, beating the reigning champion NC Dinos in three games to swap places on the table — the Dinos fell from fourth to seventh as the Heroes climbed from seventh to fourth.

Elsewhere in the table the Doosan Bears beat the Lotte Giants, the Samsung Lions beat the Kia Tigers and the Hanwha Eagles beat the KT Wiz, holding the then-first place team to no runs in two straight games before taking a loss on Sunday.

The Landers dominance over the Twins increased over the weekend. The two sides were relatively well matched on Friday, when the game ended 6-5 to SSG, but that gap increased to 8-3 on Saturday and 8-0 on Sunday. 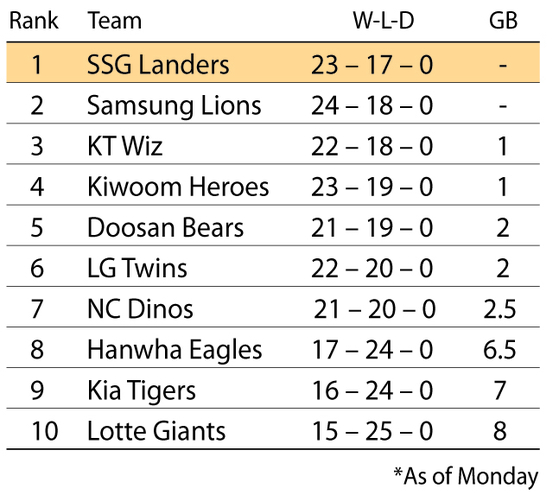 Friday's game went viral both in and outside of Korea after the Landers took the win on a bizarre bottom-of-the-ninth play that saw Choo Shin-soo nearly get run down between third and home, return to third base where the Twins catcher started chasing another batter to second while Choo turned around and ran home to score the winning run.

The play was quickly shared by baseball fans around the world on social media, leaving the Twins with both the loss and the embarrassment of going viral for the wrong reasons.

The second-place Samsung Lions won their first game against the Tigers 5-3 but then dropped the second 9-4. Victory in Sunday's rubber match came thanks to a grand slam from Park Hae-min at the bottom of the seventh that took the Lions from 5-2 down to 6-5 up in one swing of the bat.

With over 40 games played so far this season, the gap between the bottom three teams and the rest of the table is starting to widen. The top seven teams, ranging from the Landers in first to the Dinos in seventh, are separated by just 2.5 games. The Eagles train in eighth at 6.5, followed by the Tigers and the Giants.

The KBO has canceled all games on Tuesday to allow players shortlisted for the Tokyo Olympic squad to rest after receiving their second vaccine on Monday. The league will return on Wednesday as the Eagles take on the Bears, the Twins play the Giants, the Lions face the Dinos, the Landers visit the Wiz and the Heroes take on the Tigers.