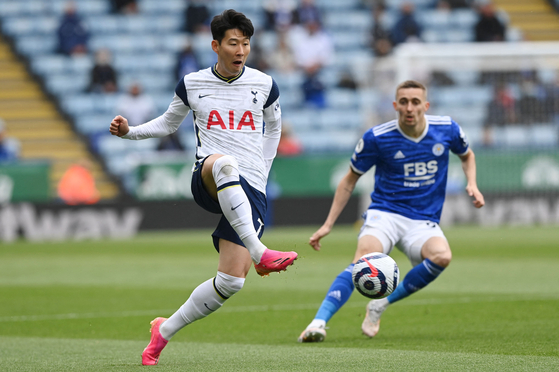 
Son Heung-min's sixth season in the Premier League ended on Sunday with a career-best 17 goals and a record-breaking partnership with Harry Kane that saw the duo break the all-time league record for the most prolific goalscoring combination.

Yet despite Son's personal success, Spurs had to settle for a disappointing end to the year, barely scraping together a seventh-place finish that earned them a spot in Europe next season, but only in the new third-tier tournament.

Leicester opened the scoring, with a goal from Jamie Vardy in the 18th minute that had the higher-ranked team looking comfortable in the early going. Spurs equalized in the 41st minute, when a Son corner bounced around the box a bit before finding Kane and then the back of the net.

Vardy added another with a penalty in the 51st minute. Spurs' equalizer came in the 76th minute, once again from a Son corner, but this time with a little unexpected help.

As Son's corner drifted toward the goal, Leicester goalkeeper Kasper Schmeichel fluffed his attempt to clear the ball, punching it along his own goal line where it rolled into the back of the net. The play was ruled a Schmeichel own goal and the score tied at 2-2.

Gareth Bale, who entered the game in the 68th minute, then struck twice, scoring in the 87th minute and again in injury time to give the London club a 4-2 win.

The dramatic finish was a positive end to the season for Spurs, who have struggled this year after starting strong at the end of 2020.

After a series of disappointing results, the European Super League debacle, the firing of former manager Jose Mourinho and a spectacular failure in the Europa League, Tottenham end the season on a high note but with a lot of questions still to be answered about what went wrong this season.

Spurs now face a difficult off season. The club is yet to find a permanent manager to replace Mourinho, and doing so is more important than ever as Kane looks for a chance to leave the club over the summer. Interim manager Ryan Mason has brought the team some good results over the last month, but a big name will be needed if Tottenham hopes to keep Kane on board.

Questions also remain over Son's future at the club. While still under contract for the next few years, Son may have his own doubts about a future at Tottenham if Kane leaves the club and a shot at some silverware still looks as elusive as it has this year.