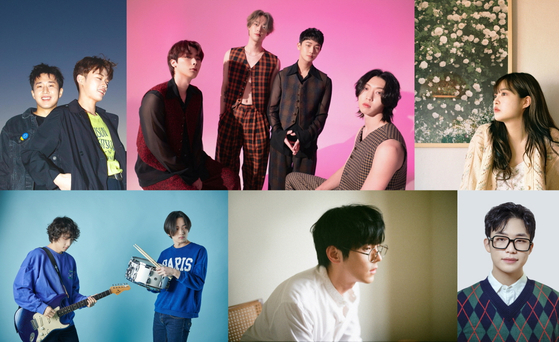 The teams of six artists who have been chosen for this year's CJ Culture Foundation Tune Up project are (clockwise from top left): Cott, Lacuna, Yebit, J.UNA, Hong Isaac and Honghae. [CJ CULTURE FOUNDATION]


CJ Culture Foundation announced on Tuesday six teams of indie artists to fund and nurture as a part of the foundation's Tune Up project series.

The Tune Up project began in 2010 and either annually or biannually chooses indie artists and provides them with funding of 15 million won ($13,360) per team and free usage of the foundation's performance and recording venue CJ Azit in Gwangheungchang, western Seoul.

The foundation also supports the online promotion of the artists, such as YouTube videos that are posted on the Azit Lives series on YouTube.

The teams chosen by the foundation this year are Cott, Lacuna, Yebit, J.UNA, Hong Isaac and Honghae. They were chosen from a total of 550 applicants.


"We have yet again seen the potential of Korean pop music during hard times when the place for musicians keeps shrinking," said the foundation.

"We hope to become a fellow and patron to allow young and talented musicians to realize their full potential as a culture foundation leading the healthy development of the Korean music industry."