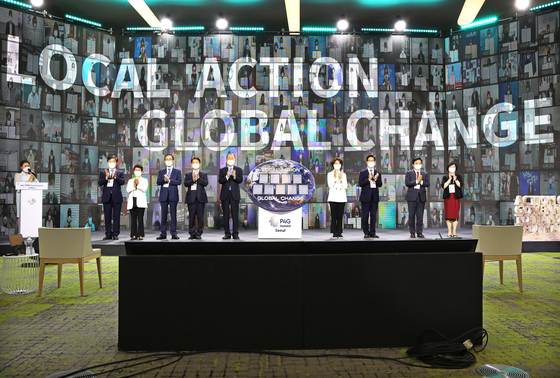 
All 243 heads of Korean local governments declared carbon neutrality for 2050 Monday ahead of the two-day P4G climate change summit which kicks off Sunday.

The opening ceremony for Green Future Week was held at the Dongdaemun Design Plaza (DDP) in central Seoul Monday evening, ahead of the Partnering for Green Growth and the Global Goals 2030 (P4G) Seoul Summit on May 30 and 31.

The ceremony was followed immediately by a session led by the Ministry of Environment, titled Actions of Local Government Towards Carbon Neutrality, bringing together regional government heads both in-person and virtually.

Korean Environment Minister Han Jeoung-ae and former UN Secretary General Ban Ki-moon, chair of the council of the Global Green Growth Institution, made keynote speeches at the session, also attended by heads of the local governments of cities and provinces including Daegu, Nonsan, Jeju, South Chungcheong and North Jeolla. Other local leaders joined in via videoconference.

This marks the first time such a joint pledge has been made by all the leaders of local governments in a country to reach net-zero carbon emissions, according to the Environment Ministry.

Han said during the session, “A big change is not possible without the help of local governments. They are in charge of reducing carbon in transportation, buildings, and other aspects close to our day-to-day life.”

The panelists in the session discussed mobilizing local action and measures such as cutting down on coal usage and building electric-powered transportation.

British economist Kate Raworth in a virtual keynote speech introduced her “doughnut economics” framework for sustainable development and spoke on how cities can lead low-carbon transformation.

Green Future Week, held from Monday to Saturday, brings together stakeholders to discuss climate and environment issues over 10 sessions covering carbon neutrality, the Green New Deal, civil society, oceans, biodiversity, green technology, forests, green finance, the future generation and a business forum leading up to the P4G summit, also to be held at the DDP.

The second P4G summit was originally planned for 2020, but the Korean government postponed it due to the Covid-19 pandemic.

The P4G Seoul Summit, with the theme of “Inclusive Green Recovery Towards Carbon Neutrality,” will be Korea’s first multilateral summit on environment.

“In countering climate change, it is crucial to ensure the participation of diverse stakeholders including the private sector and civil society,” said Korean Foreign Minister Chung Eui-young during the opening ceremony. “P4G incubates and nurtures public private partnerships that can have an important impact on the market.”

He added, “The decisions we make and the actions we take today will determine how far we will go in our ambition to tackle climate change. The upcoming P4G summit will be a timely opportunity to highlight the importance of green leadership in overcoming global challenges and preparing for the post-pandemic era.”

Environment Minister Han said in her opening address, “The 2021 P4G Seoul Summit is extremely significant as it brings together representatives from governments, industries, civil society and the young generation from developed and developing countries for the purpose of discussing ways to achieve carbon neutrality through inclusive green growth.”

She added, “The Korean government will use this year as the kickoff year for carbon neutrality implementation and build a foundation to achieve this goal.”

Han noted that a Carbon Neutrality Basic Act is under deliberation in the Korean National Assembly, and a carbon neutrality committee will be established soon.

National Assembly speaker Park Byeong-seug said in his video remarks at the ceremony, “Korea declared carbon neutrality by 2050. We must achieve this goal in order to pass down a healthy planet to our future generation. The National Assembly of the Republic of Korea will do its part by revising the relevant laws and institutions to respond to the climate crisis.”

Hundreds of officials from related foreign government agencies and members of both civil society and the private sector around the globe joined in virtually during the ceremony. With the ministers, they held up pieces of paper with their written pledges showing their commitment to carbon neutrality.

Chung’s message read: “Together through P4G, we will pave the way for a greener future.”

Han’s read: “We will lead the policy and social transformation toward 2050 Carbon Neutrality.”

President Moon Jae-in will host the P4G Seoul Summit which will bring together more than 60 leaders of foreign countries and international organizations, according to the Blue House Monday. A Seoul declaration is expected to be adopted through the summit.

The inaugural P4G summit aiming to discuss climate change and the United Nation’s Sustainable Development Goals (SDGs) was launched by Denmark in 2018.