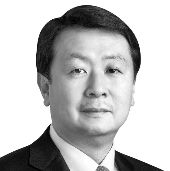 The author is a columnist at the JoongAng Ilbo.


I was heartbroken to hear that four major Korean companies announced bold plans last week to make a total of 44-trillion-won ($39.2 billion) in investments in the United States before the Korea-U.S. summit at the White House. I felt a sense of shame that tens of thousands of “dream jobs” for young Koreans were lost at once.

Let’s look at Samsung Electronics, which plans to make a 19-trillion-won investment. The Pyeongtaek 2 line, the world’s biggest semiconductor factory, started operation in August 2020. The factory, which is the size of 16 soccer fields, directly employs 4,000 workers. Including workers for partner companies, the factory created employment for more than 30,000. The construction cost of the factory was 30 trillion won. Assuming the same employment effect for investment, building a 19 trillion-won semiconductor factory in Korea would employ over 2,500 employees and create 19,000 related jobs. If you include Hyundai Motor, SK Hynix and LG Energy Solution, as many as 5,000 quality jobs will go to the U.S. The four major business groups — Samsung, Hyundai Motor, SK and LG — currently hire about 10,000 new employees each annually. Their pledges to invest in America shows how many jobs will be lost.

There are more than 420,000 young jobless people. Considering the job situation alone, President Moon Jae-in should be discouraging Korean companies from making investments overseas. He set up a job situation board in the Blue House and pledged to care for our unfortunate unemployed youth.

Since the Obama administration, the U.S. aggressively pushed a reshoring policy to bring back American companies and attract foreign investment. Thanks to the push, half of 1.4 million new jobs in the U.S. came from reshoring from 2010 to early this year. President Joe Biden declared he will create 5 million jobs through reshoring during his term. He must have been grateful to the Korean companies. Biden repeatedly thanked Korea’s corporate leaders at a White House press conference. What you should not forget is that the U.S. unemployment rate was lower than Korea’s before the pandemic — 3.7 percent against 3.8 percent in Korea in 2019.

Foreign direct investment is usually made when production in foreign countries is beneficial — for instance, when logistics costs or tariffs are high, as in automobiles or large home appliances. But semiconductors are a non-tariff item and cost little to transport, so there is no reason for a semiconductor factory to be set up abroad. 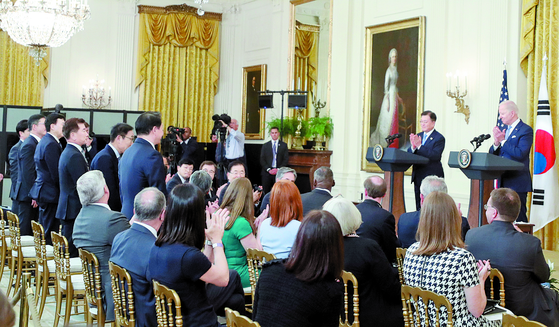 U.S. President Joe Biden gives a round of applause to Korea’s corporate leaders for their investment plans in America at the White House on May 21. [YONHAP]

Why are dream jobs that should go to young Koreans being sacrificed? In the 1960s, young Korean soldiers died in the Vietnam War, and nurses and miners were sent to Germany to make money for Korea to invest in a better future. What has Moon gained?

Moon has secured vaccines for 550,000 troops from Biden. But they are only 1.4 percent of the 80 million doses the U.S. plans to give out. Also, there’s no reason to get excited about Korea becoming the first vaccine partner of the U.S. and produce Moderna vaccines. Though they will be produced in Korea, Moderna’s Korean counterpart must make a separate contract for domestic distribution. Korea is not the only country to have a vaccine partnership. At the Quad summit in March, the U.S. made vaccine partnerships with Japan, Australia and India. Biden and the Japanese prime minister reaffirmed it at the U.S.-Japan summit last month.

As the four Korean companies announced their plan to invest in the U.S., it cannot be retracted. Korea must secure enough Moderna vaccines for the people in order not to make the “investment diplomacy” futile. Otherwise, President Moon cannot avoid the resentment that valuable jobs for the young are lost.