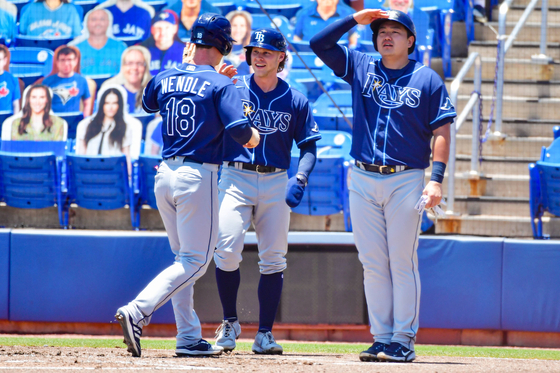 Choi Ji-man, right, pretends to search the outfield as Joey Wendle and Taylor Walls of the Tampa Bay Rays celebrate after scoring in the first inning against the Toronto Blue Jays at Tropicana Field in St Petersburg, Florida on Monday. [AFP/YONHAP]


The Tampa Bay Rays don't expect Choi Ji-man to miss any playing time this week after the Korean slugger left Monday's game early with soreness in his right knee.

Choi left the game against the Toronto Blue Jays in the fourth inning on Monday after being walked twice and later coming around to score off a Joey Wendle homerun. The Rays went on to win 14-8, claiming their 11th consecutive victory.

The Korean slugger's departure was a cause for concern in the Rays camp, as he has been on fire since returning to the squad following surgery on that same right knee earlier this year.

Choi has only appeared in eight games so far this season since rejoining the squad, but has already picked up  10 hits, eight RBIs and two home runs with a .400 batting average and a .531 on-base percentage. With the Rays currently topping the American League East with no sign of stopping soon, the loss of Choi could be a big blow to the batting lineup.

Luckily, that doesn't seem to be a concern despite the soreness.

“I do not think he will,” manager Kevin Cash told the Tampa Bay Times when asked if Choi was likely to miss some time. “His knee just started to bother him a little bit. I think there was a throw somewhere earlier in the game that just grabbed him and it got a little sore.

“At that point in the game, [leading 5-1], I’m sitting there saying, ‘Okay, let’s get him off his feet.’ I’m not sure if we make that decision in a tighter situation.”

The Rays return home on Tuesday, facing the Kansas City Royals at Tropicana Field in St. Petersburg, Florida. As things stand at the moment, Choi is expected to be back in his normal spot at first base for that game.