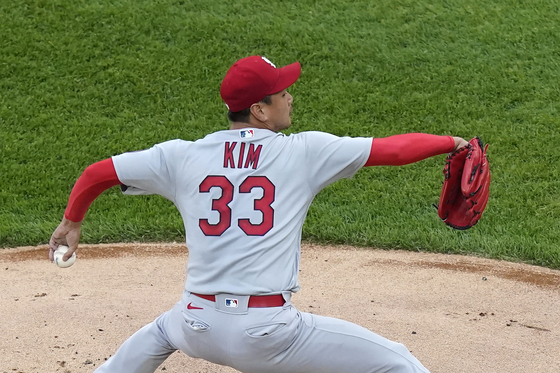 
Kim Kwang-hyun of the St. Louis Cardinals picked up his second loss in a row on Monday, giving up three runs in five and two thirds innings to the Chicago White Sox.

Kim started strong at Guaranteed Rate Field in Chicago, throwing five shutout innings before a homerun ended his outing and gave the White Sox the lead in the sixth. Chicago went on to win 5-1.

The Korean southpaw looked comfortable in the first inning, sending down the side in order with a four-pitch strikeout to start things off followed by a flyout and a groundout. He allowed a single and a double in the second inning, mixing in two strikeouts and a groundout to prevent any damage being done.

Kim made quick work of the third inning, retiring the side in order on eight pitches. In the fourth he started to look a bit shaky, giving up two walks in the inning before rallying to get the job done. These control issues have plagued Kim throughout the season, with the Korean starter unable to go deep into games as he starts to struggle in the middle innings.

Despite concerns over his longevity, the Cards pitcher looked comfortable again in the fifth, using two groundouts and a forceout to retire the side.

The sixth started with a flyout followed by a single, putting a runner on base with one out. Kim recovered with a strikeout for the second out, but then gave up a two-run homerun Andrew Vaughn to give the White Sox the lead. He followed that up with a walk, putting Leury Garcia on base before being pulled out the game.

In total the White Sox scored four in the sixth and added one more in the seventh for a 5-1 score. The Cardinals scored a single run at the top of the sixth.

Kim struck out five and threw 104 pitches, making Monday's outing his longest this season. He has a 3.09 ERA with two losses and one win this season.

Both losses have come within the last two weeks. Last season, Kim didn’t pick up a single loss. He started the season in the Cardinals bullpen but quickly earned a starting spot. Across his career in the MLB he has four wins and two losses in 14 starts.

"I am disappointed that I couldn't finish that sixth inning," Kim said in a postgame interview, according to Yonhap. "I didn't like the way I finished the day with a homerun and a walk. I'll try to go deeper into the game next time."