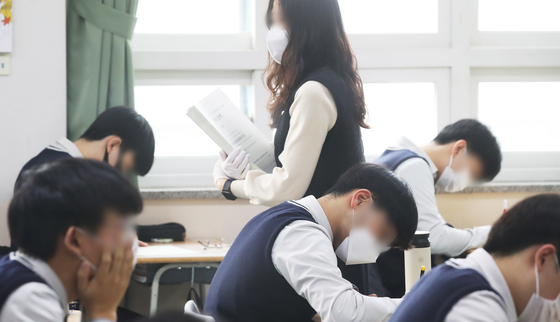 Students at Jowon high school in Suwon, Gyeonggi, take a test. Stricter restrictions were imposed during the pandemic, with students obliged to wear masks and teachers having to wear gloves during tests. [YONHAP]


During the Covid-19 pandemic, there is an endless list of dos and don'ts that restrict him from doing what he wants. He is not allowed to walk around during recess, hold hands or even chat with his classmates.

Having to wear masks to school is always a source of frustration, but not being able to hang out with his friends makes him hate the pandemic even more.

“I used to look forward to going to school, but now I'd rather listen to online classes at home,” said Park.

According to a Ministry of Gender Equality and Family survey of 7,170 students between age 9 and 24, conducted between November last year and February this year, 48.4 percent of respondents said their school experience had become negative since the outbreak of the pandemic. 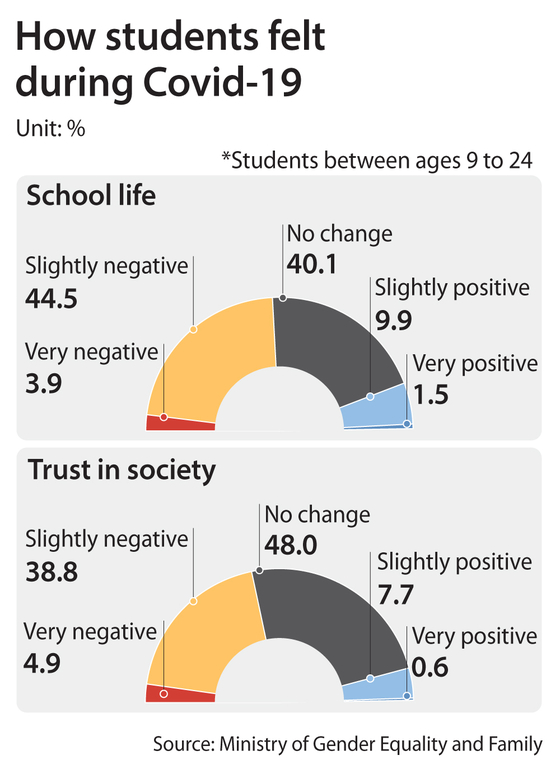 Looking specifically at middle and high school students, 83 percent said they were satisfied with school. That’s down 5.3 percentage points since 2017, when the same question was last asked.

Among the 7,170 respondents, 43.7 percent said their trust in society became negative, a stark difference to the 8.3 percent who responded positively, saying they trust society.

Perception toward employment was also gloomy. A total of 41.6 percent said their future employment prospects turned bleak. Only 7 percent showed a positive response.

The pandemic also hindered students’ physical activities, with 39.1 percent saying they had been able to exercise outdoors within the past week. The figure decreased 17.6 percentage points from 56.7 percent three years ago. The average amount of weekly exercise was 2.1 hours a week, down 1.7 hours.

Despite the pessimistic data, students evaluated their lives positively in some aspects.

The pandemic caused student perception of school and employment to fall short, but it left a positive impact on family relationships, with 22.1 percent saying their family relations improved, while 9.6 percent said they worsened.

According to data by Statistics Korea compiled with the survey, 73.5 percent of middle and high school students were satisfied with their family relations last year, up 3.1 percentage points from 2018, when the question was last asked.

A 2020 survey on student health, conducted by the Ministry of Education and Korea Disease Control and Prevention Agency between August and November 2020, shows that 25.2 percent of 54,948 middle and high school students felt depressed within the past year.

Although a notable number of students felt depressed, the number decreased 3.0 percentage points from 28.2 percent in 2019. The survey defined “feeling depressed” as experiencing sadness or distress to the point of continuously affecting one’s daily life for two or more weeks.

By gender, female students were hit harder, with 30.7 percent responding that they felt depressed while 20.1 percent of male students felt the same way.

A total of 34.2 percent of respondents said they experienced an excessive amount of stress. That number also decreased 5.7 percentage points from 39.9 percent in 2019.