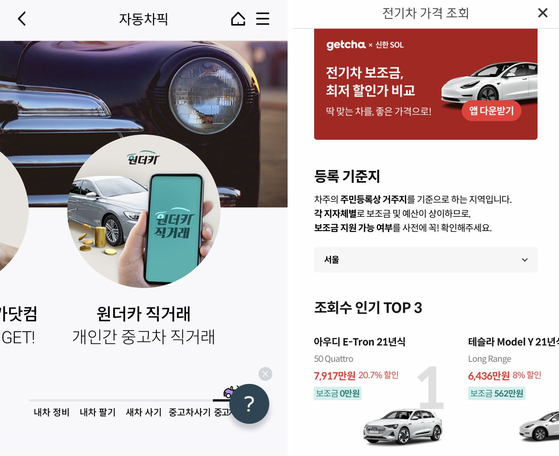 
Banks are offering a broad range of services via their apps as they face brutal competition from tech companies rapidly expanding into digital finance.

"From ownership transfers to free check-ups on the car and car delivery, our service covers the whole process of used car trade between individuals," the company said in statement.

The company inked a partnership with Car Auction and auto financial service provider Cardong on May 18 to develop the new service.

Hana Bank's new service is only the latest service rolled out by banks to transform their banking apps into "lifestyle platforms," where people can enjoy multiple services related to their daily lives on a single banking app.

Shinhan Bank said Wednesday that its SOL mobile banking app will allow users to check prices of electric cars. The app shows the lowest possible price of each electric car models when taking into account government subsidies and corporate promotions, the bank said. The app also shows basic information related to each electric car, such as the maximum driving distance per charge, after-sales centers and user reviews, as well as information on specialized auto loans offered by Shinhan Bank for environmentally-friendly cars.

Already on Shinhan Bank's app, users can make insurance claims and group-purchase artwork. The bank partnered with Seoul Auction Blue in January to enable the group purchase of artwork through its mobile app. Customers can purchase fractional ownership of an artwork at minimum price of 1,000 won ($0.89). When the artwork is later sold at auction, buyers divide the total price proportional to their ownership and split the profit. It's a relatively new type of investment gaining popularity among people born in the 1980s, 1990s and 2000s.

The bank is planning to start a food delivery service from December.

It inked a strategic partnership with Insungdata, which operates a food courier service, in April as part of the preparation to enter the fiercely-competitive food delivery business.

A spokesperson from Shinhan Bank said that the bank plans to charge lower commissions than competitors and offer point-like benefits to businesses that use the service.

The spokesman said the bank is also trying to shorten settlement for merchants. Currently there is roughly a two-to-three-week delay for payments.

The focus on non-banking services comes as they hope to attract more users to their mobile apps and also to accumulate data on clients that they can use to come up with customized financial services.

Financial group heads have been emphasizing the need to strengthen their non-financial businesses from the beginning of the year.

KB Financial Group Chairman Yoon Jong-kyoo said in his New Year's address that it has become a must for the group to strengthen non-financial businesses.

Hana Financial Group Chairman Kim Jung-tai said in his address at the beginning of the year that it's crucial for the group to establish partnerships with service providers from various sectors so that its mobile platform can cover different lifestyles of customers.

Following the money takes finance to the metaverse