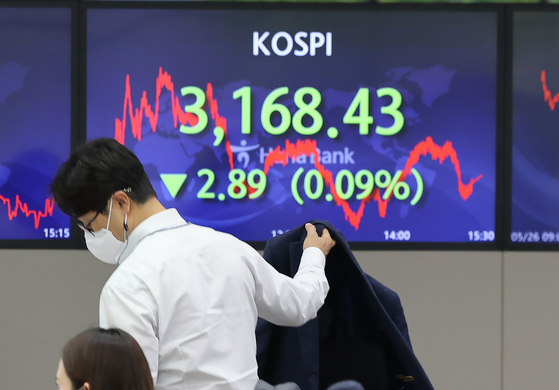 A screen in Hana Bank's trading room in central Seoul shows the Kospi closing at 3,168.43 points on Wednesday, down 2.89 points, or 0.09 percent, from the previous trading day. [YONHAP]


Stocks closed slightly lower after choppy trading Wednesday as investors took to the sidelines amid lingering concerns of early post-pandemic inflation. The won rose against the dollar.

Trading volume was moderate at about 1.3 billion shares worth some 13 trillion won ($11.6 billion), with gainers outnumbering losers 515 to 337.

Stocks opened with mild gains despite the overnight losses on Wall Street, as local economists increasingly speculate that the central bank may raise its 2021 growth forecast to some 4 percent this week.

A strong 41.1 percent jump in April exports fanned such optimism, along with brokerage forecasts for an increase in global demand for chips and autos.

But stocks lost ground after briefly touching the 3,180-point level, as investors look to lock in profits from the stock price hike before more signs of early inflation kick in in the markets.

"Investors seem to be taking their time until the personal consumption expenditures (PCE) price index comes out. [The PCE] has been a significant gauge for the Fed," Mirae Asset Securities analyst Seo Sang-young said.

The U.S. Commerce Department is set to release its latest PCE on Friday, U.S. time.

The local currency closed at 1,116.9 won against the dollar, down 5.1 won from the previous session's close.