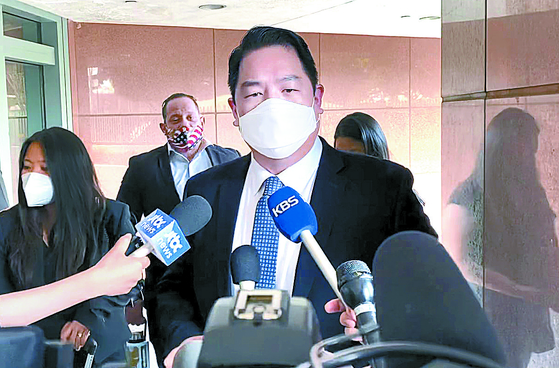 Christopher Ahn speaks to reporters after his extradition hearing in Los Angeles on Monday. [YONHAP]


Christopher Ahn, a Korean-American indicted by U.S. prosecutors on charges of participating in a group raid on the North Korean embassy in Spain, appeared in court in Los Angeles on Monday to attend his extradition hearing.

Spanish prosecutors have asked the United States to hand Ahn over to face charges including unlawful break-in, illegal detention, willful bodily harm and theft, for which Ahn could face up to 10 years in prison.

Ahn is the only member of the group who conducted the raid on Feb. 22, 2019, which calls itself the Free Joseon movement, to have been arrested to date. Its leader Adrian Hong remains a fugitive. Ahn occasionally carried out assignments for the group when asked by Hong, who is an anti-Pyongyang activist.

Media access to the courtroom was restricted, with members of the media allowed to follow the proceedings in another courtroom where a live video broadcast of the trial only showed U.S. Magistrate Judge Jean Rosenbluth — not Ahn or his attorney.

Oral arguments during the trial focused heavily on Ahn’s safety should he be extradited to Spain.

Ahn’s counsel Naeum Rim argued that once in Spain, Ahn could be at risk of assassination or abduction by Pyongyang, which maintains diplomatic relations with Madrid. She also pointed out the Spanish authorities have not clarified what level of protection Ahn would receive on Spanish soil.

“Christopher Ahn is in danger of being assassinated in broad daylight for the world to see, to make the point that North Korea will indeed go to the ends of the earth to kill a priority target like Christopher Ahn,” said Sung-Yoon Lee, assistant professor at the Fletcher School of Law and Diplomacy at Tufts University. Lee was called upon as a witness for Ahn, over the objections of prosecutors.

In their extradition request, Spanish authorities said Ahn, along with others of the group, violently assaulted and physically restrained embassy staff and family members, including a child, using “knives, machetes, iron bars, imitation handguns, shackles and cables.”

However, lawyers representing Christopher Ahn wrote a letter to the court in February saying he and the other assailants undertook the raid at the behest of at least one North Korean diplomat who had contacted the group beforehand.

The North Korean diplomat, who Ahn identified as a commercial attaché named So Yun-suk in an interview with Buzzfeed News, proposed that Free Joseon stage a fake abduction of diplomats who wanted to defect as a ruse to mask their defection, according to Ahn’s counsel. The subterfuge was prompted by fears that Pyongyang would carry out reprisals against family members left behind in North Korea should the defection be discovered, the counsel added.

However, the diplomats who wanted to defect changed their minds once Madrid police were tipped off to the presence of intruders by a wife of an embassy official, who escaped by jumping off a terrace, according to Ahn.

During Monday’s hearing, Judge Rosenbluth requested that prosecutors prove that the testimonies of embassy staff in the incident were not fabricated out of fear out of reprisals from Pyongyang.

In response, prosecutors presented footage of Ahn entering the Madrid embassy with a backpack and submitted receipts of items they used to take embassy staff hostage, which included toy guns and plastic restraints.

At the end of the proceedings, Judge Rosenbluth scheduled another hearing for June 4, citing the amount of evidence that requires review.

Ahn expressed confidence that he will prevail in the case.

“I just want to say one thing, how appreciative I am of all the supporters and of all the people who have been very supportive of me and have reached out to me and have believed in me,” Ahn said after the hearing was over. “We all believe that truth, logic, common sense will make the day.”

Ahn added that he hopes the judge will make “the right decision.” He is currently out on bail.