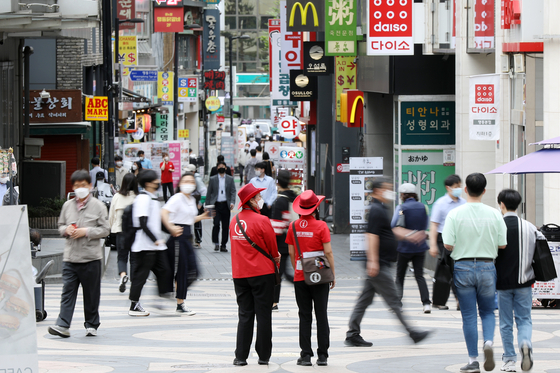 The government announced Wednesday that people who have had their first vaccine shot will be allowed to take off their masks outdoors starting in July. In addition, it announced the lifting of restrictions on gatherings for vaccinated people. In the photo, people are walking in Myeongdong in central Seoul with their masks on Wednesday. [NEWS1]


To encourage people to get vaccinated, the government is dangling incentives — like allowing bigger family gatherings in June, or the ability to walk outside without a mask in July.

These freedoms will apply to people who got at least their first jabs 14 days before. People can prove their vaccination status through a digital certificate from the mobile application COOV or a paper certificate issued after inoculation.

Health Minister Kwon Deok-cheol announced the incentives Wednesday. They are meant "to support the return to daily life of vaccinated people and to encourage the public's participation in the vaccination campaign," he said.

New vaccine incentives will be applied in three phases: in June, July and after September.

Starting in June, people who have gotten at least one dose of a Covid-19 vaccine will be exempt from bans on private gatherings of immediate family members. The current limit for family gatherings is a maximum of eight people.

It will re-open community centers for elderly people, of which more than half were shut down due to concerns over the virus. The community centers will offer various lessons such as art, computer and yoga to lift the spirits of seniors.

As previously announced, face-to-face visits at nursing homes will be allowed for fully vaccinated people starting next month.

Entrance fees for national parks and Korean palaces will be discounted or waived to encourage people to take advantage of freedoms — after they are inoculated.

More incentives will come in July.

People who have gotten their first shot at least 14 days earlier will be able to take a walk on the street or exercise in parks or on hiking trails without wearing a mask. Currently, masks can only be taken off if a distance of two meters is kept from others.

In response to concerns that distinguishing between vaccinated and non-vaccinated people will be difficult outdoors, health authorities said it can be checked via mobile certificates, but the honor system should suffice.

"We believe it is a measure that needs public cooperation based on trust," said Sohn Young-rae, a senior health official of the Central Disaster and Safety Countermeasure Headquarters, during a Wednesday briefing. "Thus, we ask for your cooperation in this matter."

At mass rallies or events where many people gather, however, wearing masks will still be mandatory, even outdoors.

Another big incentive coming in July for fully-vaccinated people is a waiving of a ban on private gatherings.

Currently, Korea bans private gatherings of more than four people in most regions, or more than eight in others.

In addition, fully-vaccinated people will be exempt from attendance limits based on social distancing regulations for both indoor and outdoor places. For example, under the current social distancing Level 2 in the greater Seoul area, a maximum of 100 people are allowed in public indoor facilities such as wedding halls.

Those who have received one dose, however, will be exempt from attendance limits only in outdoor places.

Health authorities added that they are considering creating a separate space for fully-vaccinated people in sports stadiums and movie theaters, where food and cheering will be allowed.

By the end of September, when Korea aims to have more than 70 percent of its population at least partially vaccinated, the government will further ease social distancing measures. It may lift indoor mask mandates after December.

You can get a vaccine certificate after inoculation, or by visiting the government websites (nip.kdca.go.kr) or (www.gov.kr).

Vaccine certificates are also available as a QR code from the application COOV by the Korea Disease Control and Prevention Agency (KDCA).

The government aims to inoculate 13 million people by the end of June, with the goal of achieving herd immunity no later than November.

Korea’s daily Covid-19 cases bounced back above 700 on Wednesday, with almost 200 more cases than the previous day. 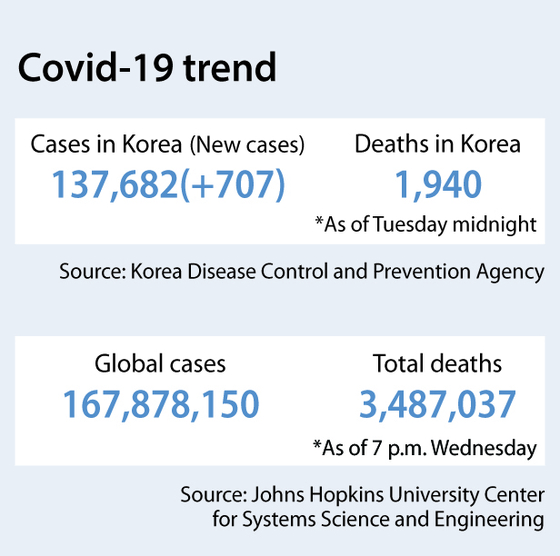 The country reported 707 new Covid-19 cases on Wednesday, including 684 local infections, raising the total caseload to 137,682, the KDCA said.

There were two additional virus deaths, raising the total to 1,940.

Infections tied to a hostess bar in the basement of a hotel in Daegu are surging rapidly, with 199 cases in total. Concerns are growing as some of them have contracted the British variant, which is known to be more contagious.

Virus cases linked to hostess bars in Chuncheon and Wonju in Gangwon are also continuing, as well as from a livestock market and a shop in the bus terminal in Gwangju, South Jeolla.