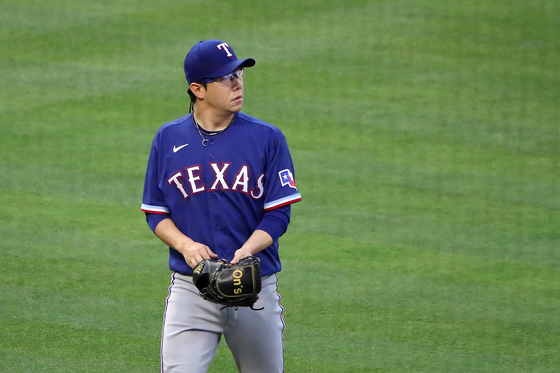 Yang Hyeon-jong of the Texas Rangers looks on at the end of the second inning after giving up a two run homer to Jared Walsh of the Los Angeles Angels at Angel Stadium in Anaheim, California, on Tuesday. [AFP/YONHAP]


Yang Hyeon-jong got roughed up in his third start for the Texas Rangers on Tuesday, giving up seven runs in an 11-5 loss to the Los Angeles Angels.

Yang allowed five hits in three and one third innings of work, giving up three walks and two home runs with two strikeouts for his second loss of his brief MLB starter career.

The confidence that had carried Yang through five MLB appearances this season wasn't evident at Angel Stadium in Anaheim, California, on Tuesday, with the Korean southpaw kicking things off with a solo homerun to the very first batter he faced.

Already down 1-0 without an out, Yang gave up a walk to Shohei Ohtani before settling down to ground the next batter into a double play and add a lineout to end the first.

Yang still looked shaky in the second, giving up a walk to start off the inning followed by another homer, taking the score to 3-0 with only six batters faced. He was able to stem the bleeding for a bit, retiring the next three batters in order on just four pitches to end the inning.

Two strikeouts and a groundout quickly took care of the third inning, but Yang wasn't able to keep that momentum up into the fourth.

The ill-fated inning started with a single to Juan Lagares, followed by a walk. With two on and no outs, Yang threw a wild pitch that allowed both runners to move up a base. The next two hits were singles, bringing home both runners, followed by a flyout.

Yang then left the game with one out and two on, both of whom later came around to score. Yang was tagged with all seven of the nine runs scored in the first four innings and took the loss.

The Angels added two more in the fifth for 11 runs, while the Rangers scored one at the top of the fourth, two in the sixth and two in the ninth.

Yang joined the Rangers on a minor league contract this year with a chance to compete for a major league spot. He played 14 years in the KBO with the Kia Tigers, winning the ERA title in both 2015 and 2019. In 2017, he led the Tigers to the Korean Series title, winning both the regular season and championship MVP titles along the way. Yang has a career ERA at 3.83 with 147 wins and 95 losses in the KBO.

He has risen quickly through the Rangers' ranks. After getting called up to the Rangers on April 26, Yang gave up just two hits in eight and two third innings in two long reliever appearances before getting his first start on May 5.

Yang, who went from taxi squad to reliever to starter in less than two weeks, threw eight strikeouts and gave up one run against the Minnesota Twins in that first start, becoming only the second player in Rangers history to record eight strikeouts in so few innings. Yang allowed four hits and one run for a 2.25 ERA.

That ERA has now risen to 5.47 with 15 earned runs over 24 and two thirds innings pitched.