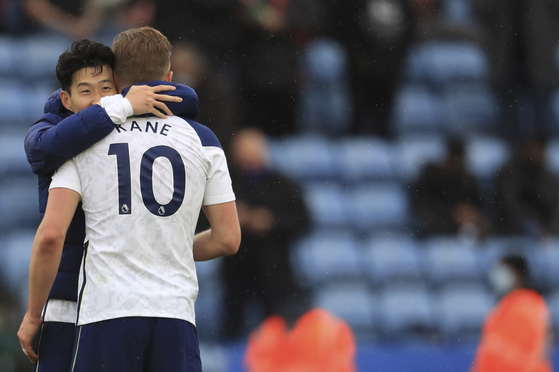 
Tottenham Hotspur is "confident" Son Heung-min will stay with the club, despite questions surrounding the Korean striker's future following the team's lack of success this season and the expected departure of playmaking partner Harry Kane.

Football Insider reported Tuesday that a Tottenham official said the club was "confident" Son would not leave in the summer transfer window, the only comment so far on the forward's future. Son is yet to give any indication as to his thoughts about his future at the club.

Son is currently under contract with Spurs until 2023. He has appeared happy at the club, but the uncertainty of the 2020-21 season, the departure of manager Jose Mourinho and the potential loss of Kane could seriously impact that outlook.

Spurs' lack of success also raises questions about where Son wants to spend the prime days of his career. The London club hasn't won the Premier League since 1961, the FA Cup since 1991 and has never won the UEFA Champions League or Europa League. Next season, they will only play in the new Europa Conference League, a third-tier European league.

Son, the captain of the Korean national team, is recognized as a world-class player. In the last couple of weeks, a string of the Premier League's top pundits, including Jamie Carragher and Rio Ferdinand, named Son among the top players in the league, with Ferdinand calling his performance "unbelievable."

Kane, the winner of the 2020-21 Premier League Golden Boot and Playmaker, is also a national team captain and a world-class player under contract with Spurs until 2024. He has been more vocal about his desire to leave the club and play for a team that has the potential to be seriously competitive.

“Yeah, I want to be playing in the biggest games, the biggest moments," Kane told Gary Neville earlier this week.

As both Kane and Son are still under contract, they can't just leave the club, even if they want to. While FIFA rules do allow them to buy their way out of a contract after a certain period of time, the more likely approach is to persuade Tottenham to sell them. As important as Kane is to the team, Spurs will probably take the option to cash in on the sale rather than keep a publicly disgruntled star in the ranks.

The club are apparently confident Son won't attempt the same thing. While the Korean forward's position is still unclear, naming a new manager has to be the club's top priority if it wants to give Son and the rest of the squad something to look forward to next season.