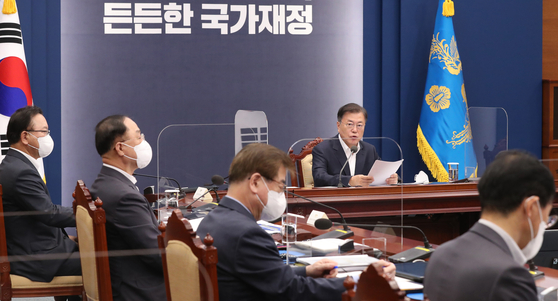 President Moon Jae-in makes an opening speech ahead of meeting in which the government and ruling Democratic Party discussed the government's fiscal policy at the Blue House on Thursday. [YONHAP]


President Moon Jae-in has decided to keep the current expansionary fiscal policy through next year until the economy recovers.

“There have been clashing views between demands for an expansionary fiscal policy and those that emphasize fiscal soundness,” Moon said Thursday during a fiscal policy meeting held at the Blue House attended by top government officials and the leadership of the ruling Democratic Party.

“The expansionary fiscal direction should be maintained for our economic rebound to be certain,” Moon said. “We have to consistently increase [government] investment in employment security and the social safety net including supporting jobs for vulnerable people and employment insurance for all.”

Moon emphasized the need for speed to “maximize” the effect of fiscal policies.

He said the role of fiscal spending is to stimulate spending by households and businesses while bridging certain gaps in society, whether they be in incomes, social status or in businesses.

Moon acknowledged that spending has been aggressive due to the unprecedented global pandemic. He stressed that Korea still has room to spend more thanks to its relatively conservative fiscal management.

“It is true that the national debt has increased at a rapid pace in the course of countering the recent [Covid-19] crisis” Moon said. “However, when compared to other countries, the increase in spending is low while fiscal soundness is adequate.”

The president also stressed the need for massive government investment in restructuring the Korean economy especially at a time when global competition in digital and green industries is heating up.

“We need to further expand our investment in new industries and technology, starting with the Korean New Deal, through which 160 trillion won ($140 billion) in government spending will be injected by 2025,” Moon said.

“This government has only a year to determine the future of Korea after Covid-19,” Moon said.

There was speculation that Moon's government may curb its spending as the national debt ballooned.

Since the government began in 2017, spending has been increased aggressively.

This year, the budget expanded 8.9 percent.

This year’s government’s debt is expected to amount to 956 trillion won, a 13 percent increase compared to 2020.

Considering that the government debt was 660 trillion won in 2017, debt during the Moon administration has risen 45 percent.

The national debt-to-GDP ratio this year is expected to be 47.3 percent, a sharp increase from  36 percent in 2017.