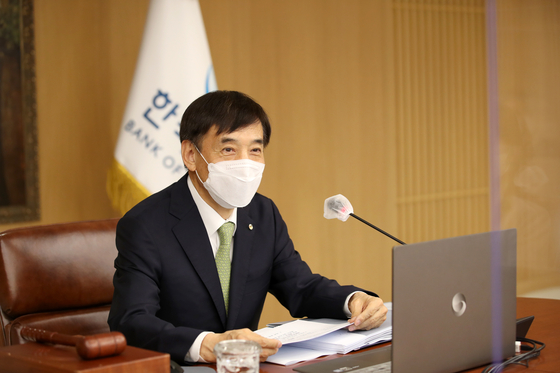 Bank of Korea Gov. Lee Ju-yeol speaks during a monetary policy board meeting held Thursday. The board voted to maintain the base rate at 0.5 percent. [BANK OF KOREA]

The Bank of Korea maintained its base rate at 0.5 percent Thursday.

The benchmark rate has been held at that record low level since May 2020.

Last year, the monetary policy board of the central bank lowered the base rate twice -- in March to 0.75 percent and in May to 0.5 percent -- as the economy weakened due to the pandemic.

While Korean export figures and consumer sentiment started picking up this year on the recovery in the global economy, and signs of inflation are evident, the central bank continues to see uncertainties related to the pandemic and household debt, which has increased dramatically in recent months.

According to data released by the central bank earlier this week, household debt hit 1,765 trillion won ($1.6 trillion) in the first quarter, a 9.5 percent increase year on year.

The Korea Financial Investment Association announced Tuesday that 98 percent of those surveyed forecast no change in rates due to the low vaccination rate in Korea and social distancing requirements.

bank of korea base rate