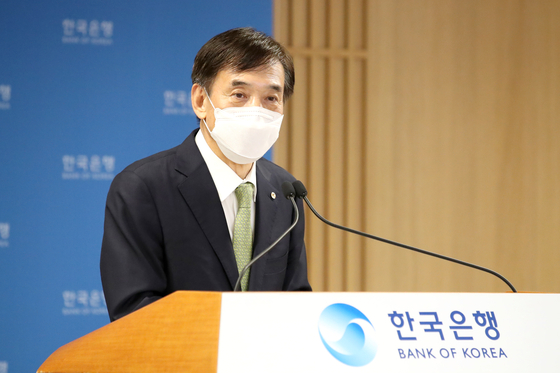 Bank of Korea Gov. Lee Ju-yeol speaks during a press briefing held Thursday after the monetary policy board meeting at the bank's headquarters in Jung District, central Seoul. [BANK OF KOREA]

The Bank of Korea upped its 2021 growth forecast while holding interest rates steady on Thursday as it balanced optimism about a fast recovery with concern about crushing household debt.

Strong exports and facility investment and improved private consumption were major drivers of the revised outlook, according to the central bank.

Despite faster-than-expected pace of recovery in the global and local economies, Gov. Lee Ju-yeol said the monetary policy board voted to hold the rate considering uncertainties related to the coronavirus and vaccinations.

Higher household debt was also a factor in its decision.

According to data released by the central bank earlier this week, household debt hit 1,765 trillion won ($1.6 trillion) in the first quarter, a 9.5 percent increase year on year.

Lee conceded that the bank is facing a dilemma, as a rate increase would stress indebted households, but the central bank also needs to control mounting household debt at some point.

We can’t rush the rate increase, he said. “But at the same time, we are considering the risks of massive side effects if we are late.”

Lee said that the central bank is closely watching changes in monetary policy of the U.S. Federal Reserve, but it doesn’t mean the local policies will sync with the Fed’s decisions.

On Thursday, the bank also raised its estimate for inflation this year to 1.8 percent from the 1.3 percent projected in February.

The bank said the revised projection reflects rising prices of oil and agricultural and livestock products as well as an overall improvement in consumer sentiment.

Earlier this month, the Korea Capital Market Institute raised the country’s economic outlook for 2021 to 4.3 percent, from a projection of 3.3 percent. The Korea Institute of Finance raised its outlook to 4.1 percent this month from its earlier forecast of 2.9 percent.

Despite the upped projections, the central bank did not signal a rate increase this year, said Kim Myung-sil, an analyst from Shinhan Financial Investment. “The bank kept a neutral stance. It seems unlikely for the bank to raise rates this year.”

“We expect the bank to keep the base rate at 0.5 percent throughout the year, and start raising rates from the latter half of next year,” analyst Baek Yoon-min from Kyobo Securities said.

Korea’s central bank has kept the rate at a record low of 0.5 percent since May 2020. Last year, the monetary policy board lowered the base rate twice – in March to 0.75 percent and in May to 0.5 percent – as the economy weakened due to the pandemic.

Bank of Korea takes base rate to 1.5%, up a quarter point

Choo and Rhee in agreement about inflation and vow action