As many await PCE data, Kospi continues on its torpid decline

As many await PCE data, Kospi continues on its torpid decline 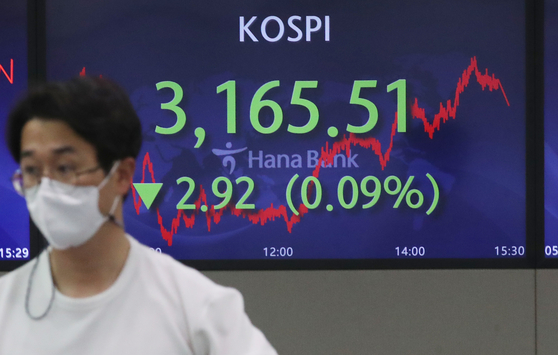 A screen in Hana Bank's trading room in central Seoul shows the Kospi closing at 3,165.51 points on Thursday, down 2.92 points, or 0.09 percent, from the previous trading day. [NEWS1]


Stocks closed a tad lower Thursday, as investors wait for key economic data from the United States later this week, which is widely seen as a gauge for a potential rate hike. The won fell against the dollar.

The Kospi got off to a muted start as investor caution grew while waiting for the personal consumption expenditures (PCE) data.

The U.S. Department of Commerce is set to release the latest PCE on Friday, U.S. time.

Stock losses deepened as the Bank of Korea raised its growth outlook for 2021 to 4 percent, sharply up from the previously projected 3 percent, and also 3 percent in 2022.

The rebalancing of the Morgan Stanley Capital International index also led to a fall in market heavyweights.

The local currency closed at 1,118.1 won against the dollar, up 1.2 won from the previous session's close.